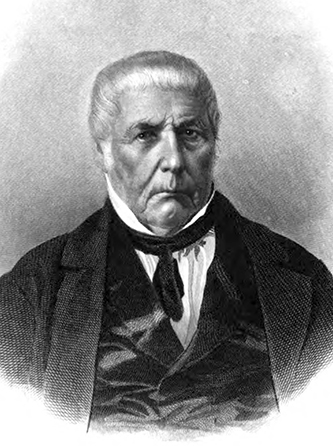 David Hoover, pioneer settler of Indiana, public official, and author, was born on the Uwharrie River in Randolph County, the son of Andrew Hoover, a well-to-do farmer of German descent who owned no slaves. David had virtually no opportunity to receive a formal education but read widely and cultivated a number of talents. In the early fall of 1802, when he was twenty-one, the family possessions were sold and the Hoovers and some neighbors set out for the Northwest Territory. After five weeks they reached a site some 12 miles north of modern Dayton, Ohio, purchased 200 acres as a base, and began to search for a permanent home. David scouted out the country for a considerable distance and in 1806 found a site that offered springwater, timber, and building stone in what is now Wayne County, Ind. After returning to Ohio, he was accompanied back to this site by his father and others, mostly North Carolinians, and they determined to locate there. In 1816 David Hoover platted and named the settlement that developed into the city of Richmond, Ind. In 1807, soon after arriving in Indiana, Hoover married Catherine Yount, and they became the parents of seven children. Although he was a Democrat in strong Whig country, he served six terms in the state senate between 1832 and 1844. Hoover described himself as a Jeffersonian Democrat and often quoted Jefferson. Earlier he was elected a justice of the peace (1810) and an associate judge (1815). For fourteen years he was also clerk of the Wayne Circuit Court and in time, as a highly respected elder citizen and pioneer settler, he organized an association of early inhabitants which met regularly.

Hoover often made public addresses and was the author of Some Recollections of My Boyhood Days, undated but published in Indianapolis, and of Memoirs of David Hoover, published in Richmond, Ind., in 1857. Although not a formal member of the Society of Friends, he regarded himself as a Quaker.

"David Hoover." Engraving. Memoirs of Wayne county & the city of Richmond, Indiana, from the earliest historical times down to the present, including a genealogical & biographical record of representative families in Wayne county. Madison, Wisconsin: Western historical association. 1912. Facing 541. http://babel.hathitrust.org/cgi/pt?id=mdp.39015026294416;view=1up;seq=592 (accessed May 1, 2014).