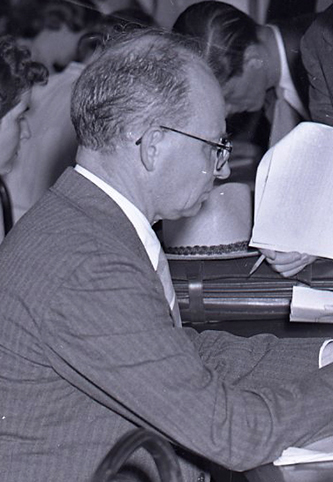 Holland Holton, educator, the son of Samuel Melanchthon and Aura Barrett Chaffin Holton, was born at Dobson, but his family moved to Durham in 1894. He completed his secondary education in Durham High School in 1903 and in the fall of that year entered Trinity College (now Duke University), where he was graduated with the B.A. degree in 1907. Holton began his career as principal of East Durham High School (1907–9). From there he went on to become head of the department of history at Durham High School (1909–10), principal of West Durham High School (1911–14, 1915–19), instructor in public speaking at Trinity College (1912–19), and assistant superintendent (1915–19) and superintendent (1919–21) of the Durham County schools. Meanwhile, he attended the Trinity College School of Law (1910–11, 1914–15) and the University of Chicago Law School (summers, 1915–17). He received the doctor of jurisprudence degree in 1927 after spending the 1926–27 session at Chicago.

In 1921, Holton joined the faculty of Trinity College as professor of education and the legal phases of educational administration, and as head of the Department of Education. He had been named director of the Trinity College Summer School in 1920 and held that post until his death. While at Duke University, Holton devoted much personal and professional time to his contacts with public schoolteachers, providing them with offschedule classes, seminars, and conferences.

A Republican, Holton served for two years on the state executive committee. He was a member of Duke Memorial Methodist Church and active in its lay program, particularly the Sunday school. In addition, he was a Mason (3rd degree), a Knight of Pythias, and a member of the Kiwanis Club of Durham (president, one term). Among his fraternal affiliations were Phi Beta Kappa (scholarship), Tau Kappa Alpha, Kappa Delta Pi (education), and Phi Delta Kappa.

On 24 Dec. 1911, he married Lela Daisy Young, the daughter of George Polk and Arthelia Belvin Young. They had three sons: Winfred Quinton, who died in his youth; Samuel Melanchthon; and Holland Young. Holton died and was buried in Durham.