George Vernon Holloman, inventor and Army Air Corps officer, who from 1931 to 1945 pioneered in aeronautical engineering research and development, was born in Rich Square, the son of George Lycurgus and Hulda Eggleston Holloman. He attended local schools and was graduated from high school just as the first radio receiving set arrived in Rich Square. Fascinated by the new device, Holloman promptly enrolled in a course at Southern Radio College in Norfolk, Va. He then was employed by and sent to Europe and Asia as a representative of the American Marconi Company (later Radio Corporation of America). He gradually accumulated funds that enabled him to earn an electrical engineering degree with honors at North Carolina State College. As an ROTC student, he was commissioned a second lieutenant in the infantry and spent two years at Fort Benning, Ga., as regimental communications officer and adjutant of the Special Weapons Battalion of regimental headquarters.

In 1927 Holloman was transferred to the Army Air Corps, sent to Brooks Field, San Antonio, Tex., for flight training, and was graduated with wings in June 1928. His first assignment as an Air Corps pilot was at Post Field, Fort Sill, Okla., where he and four other young officers were charged with reactivating the old Eighty-eighth Observation Squadron. The Eighty-eighth had had a brilliant World War I record but had been demobilized in 1922. Holloman served as engineering officer of the squadron until it joined a Composite Air Force Group under Major Lewis H. Brereton. 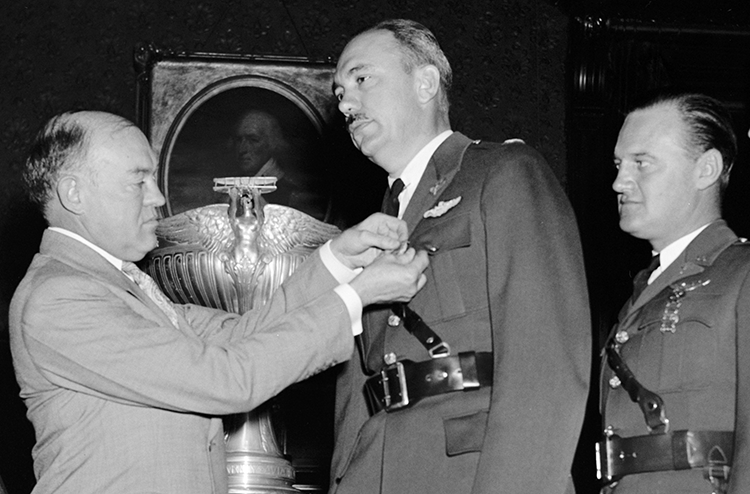 From February to May 1934, Holloman was detailed to the U.S. Air Mail responsibilities of the Army Air Corps and flew the night mail circuit between Pittsburgh and Newark. Later, as control officer of the western end of the Eastern Air Mail zone, he was stationed at Chicago on temporary detached service from a permanent post of duty with the Army Air Corps Materiel Division at Wright Field. He spent the summer of 1934 at the Air Corps Technical School at Chanute Field, Ill., for advanced study in communications. For the remainder of the year and much of 1935, he attended the Air Corps Engineering School at Wright Field to take advanced training in aeronautical engineering.

Upon completion of the advanced communications program at Chanute Field, Holloman was made assistant director of the Instrument and Navigation Laboratories at Wright Field. Eventually eleven in number, the laboratories conducted research and development of various types of aircraft instrument navigation equipment such as automatic pilots, instrument landing systems, and automatic flight and landing equipment to serve by night as well as by day or in foul or fair weather. By August 1937, the completely automatic landing of an airplane was accomplished for the first time, with George Holloman and R. K. Stout as passenger-observers. A series of such automatic landings that month demonstrated the reliability of the invention. A growing stream of exciting, imaginative engineering achievements came from the laboratories, adding strength and flexibility as well as range and reliability to aircraft operations, and helping to lay the foundations for the powerful American air fleets of World War II and postwar air transport development.

In April 1941, war conditions in the world and apprehensions of U.S. involvement led to the formation at Wright Field of a new group of laboratories known collectively as the Special Weapons Unit. Colonel Holloman was placed in charge of the unit and served in that post until World War II approached its end in Europe in the spring of 1945. (Having been commissioned second lieutenant in June 1925, Holloman was promoted to first lieutenant in July 1931, to captain in August 1935, to major in November 1940, to lieutenant colonel in December 1941, and to colonel in April 1942.) In March 1945 he transferred from the Wright Field Laboratories to take a then secret assignment in the Pacific Theater of war.

On 19 Mar. 1946 a B-17 bomber, piloted by Major General James E. Parker, commanding general of the Twentieth U.S. Air Force, crashed into a mountain on the island of Formosa while on a flight from Shanghai, China, to Manila in the Philippine Islands. The general and nine other Army Air Force personnel aboard the plane were killed. Colonel Holloman was among them. Holloman Air Force Base, New Mexico, was named for him.

Holloman was married in 1932 at Kenilworth, Ill., to Dorothy Darling, a niece of John Motley Morehead of North Carolina and Rye, N.Y. Their only child, George V., Jr., was born in Chicago in 1934.