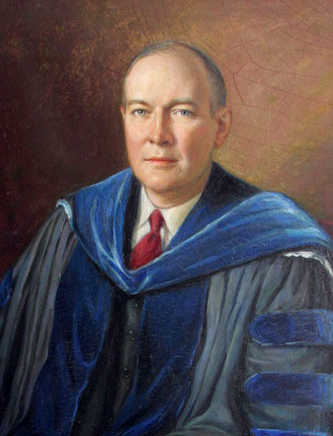 Henry Harrington Hill, educator, was born in Statesville, the son of James Henry and Anne Harrington Hill. The elder Hill was the leading educator in Iredell County for over fifty years. He served briefly as county superintendent of schools, a position he originally refused, then for almost twenty years was chairman of the county board of education. But James Henry Hill is perhaps best remembered for his association with Statesville Male Academy, the school he headed from 1898 to 1905; at various times he also taught at Statesville's Simonton College.

Henry Hill received his education under his father's supervision until the age of fifteen, when he entered Davidson College; after spending three years there, he transferred to the University of Virginia. At Virginia he was elected to Phi Beta Kappa, and earned both the bachelor's and master's degrees. His Ph.D. from Teachers College, Columbia University, was awarded in 1930. Hill began his teaching career in Walnut Ridge, Ark., in 1916, and from 1922 to 1927 was the town's superintendent of schools. From 1927 his rise in the profession was rapid. In sequence he became principal of North Little Rock High School; supervisor of high schools for the state of Arkansas; professor of school administration at the University of Kentucky; superintendent of the Lexington, Ky., schools; assistant superintendent of schools for the city of St. Louis;, and, in 1941, dean of the University of Kentucky's School of Education. He occupied the deanship for one year before moving to Pittsburgh, Pa., to become superintendent of schools.

In 1945 Hill was elected president of George Peabody College for Teachers in Tennessee and served with distinction until his retirement in 1961. His presidency was marked by a period of substantial growth in enrollment, an increase in the number of faculty members, and additions to the physical plant. Hill was a competent administrator who worked well with faculty and staff. As one writer observed, "He was a talented, intelligent man who could have chosen [any one of] many professions," but instead "chose to be a teacher." He possessed a clear vision of Peabody's mission, and though educated in private schools was a tireless and outspoken supporter of public schools. As an individual Hill was dignified in appearance and in every respect the cultured gentleman; also, his gentle sense of humor tended to place individuals and groups at ease. Widely recognized as a leader in education, Hill received honorary degrees from a number of institutions, among them Columbia University, the University of Pittsburgh, the University of Kentucky, Harvard University, and Davidson College. He was an active member of the American Association of School Administrators, a trustee of the Educational Testing Service, and president of the Southern Association of Colleges and Schools. When Felix Robb, who succeeded him as president of Peabody, resigned to accept an executive position with the Southern Association, Hill was persuaded to return as interim president, a position he held from July 1966 to August 1967.

In 1922 Hill married Elizabeth Eloise Wilkes of Durant, Miss.; she died in 1979. Funeral services for Dr. Hill were held in Nashville's Westminster Presbyterian Church, where he had served as an elder; interment was in Mount Olivet Cemetery. Hill was survived by his daughter, Adrienne (Mrs. Kirkland W. Todd), four grandchildren, and four great-grandchildren.

It is interesting to note that two other Peabody presidents in this century were native North Carolinians—Bruce Ryburn Payne of Morganton (1911–37) and Sidney Clarence Garrison of Lincolnton (1937–45).