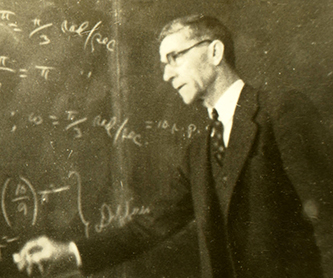 Thomas Felix Hickerson, Kenan Professor of Applied Mathematics at The University of North Carolina and world-famed authority on highway engineering, was born on the Roundabout farm near Ronda in Wilkes County, the fourth son of Dr. James and Anne Eliza Hickerson. His parents lived at the family home in the Happy Valley area of the Yadkin River. Hickerson studied this region and its people, publishing the results in two books, Happy Valley (1940) and Echoes of Happy Valley (1962). In 1964 he wrote a booklet, The Faulkner Feuds, in which he vindicated Richard J. Thurmond of Happy Valley who in 1889 shot and killed Colonel W. C. Faulkner, the great-grandfather of novelist William Faulkner.

Hickerson received his schooling in Ronda and at the Bingham Military School in Asheville. At The University of North Carolina, he won the Holt Medal for his mathematical abilities in his senior year, graduating with a Ph.B. degree in 1904. He taught for a year at the Bingham School and in 1905 returned to Chapel Hill for graduate work in mathematics and engineering; he also was an instructor in mathematics. After receiving the A.M. degree in 1907, he studied civil engineering at the Massachusetts Institute of Technology, earning a B.S. degree in 1909. Later he attended a graduate course in highway engineering at Columbia University (winter, 1911–12) and a teachers' seminar on applied mechanics at Cornell University (summer, 1927).

In 1909 Hickerson joined the faculty of The University of North Carolina as associate professor of civil engineering; in 1920 he was promoted to full professor in the School of Engineering. When the School of Engineering was dissolved in 1936, he chose to remain in Chapel Hill as a member of the mathematics department rather than move to Raleigh. In 1938 his title was established as professor of applied mathematics, and in 1945 he received a Kenan professorhip. He retired in 1952.

Hickerson's books on bridge and road building, including Route Surveys and Design, Highway Curves and Earthwork, and Highway Surveying and Planning, served a generation of civil engineers (a complete list of his publications is in the North Carolina Engineer, July 1965). Two accounts reflect this: a highway engineer working on the Burma Road in World War II found his Route Surveys and Design extremely helpful; and in 1967, when an engineer in Africa needed help on a problem of road intersections and tangents, Hickerson sent him the fifth revised edition of his book with up-to-date and precise information—in Hickerson's own handwriting—on how to do it. He developed and contributed to the profession ideas, tables, and methods relating to such things as spiral curves and their super elevation, the laying out of circular and spiraled curves by deflections from the point of intersection of the tangents, the bearing strengths of columns, analysis of stresses in bridge and building frames, and the solution of spherical triangles applicable to celestial observations in the determination of azimuth, latitude, and time.

For fifty-one years Hickerson was a member of the Order of Gimghoul and a trustee for twenty-eight years. He participated in the concept, planning, and establishment of the Order's real estate development; later, with A. H. Patterson, he supervised the erection of the Waldensian Castle. Hickerson planted the boxwood bushes that circle Dromgoole Rock and in later years supervised the maintenance of the castle and grounds.

Hickerson, a bachelor, was known for his hospitality and old-world courtesy. He delighted in entertaining his students and friends at his home on Battle Lane and in sharing his flowers. Some years before his death he established a scholarship fund for his students. A member of the Episcopal church, Hickerson was buried in the family plot at Ronda. A drawing of him by Adrian Lamb is published in Howell's The Kenan Professorships.

Faculty Tribute by L. A. Cotton and others, 11 Aug. 1968 (Archives, University of North Carolina, Chapel Hill).

"Thomas Felix Hickerson (1882-1968) and Hickerson House."  The Carolina Story: A Virtual Museum of University History. The University Library and The UNC Center for the Study of the American South. University of North Carolina at Chapel Hill. http://museum.unc.edu/exhibits/names/thomas-felix-hickerson-1882-1968-and-hickerson-hou/ (accessed April 22, 2014).