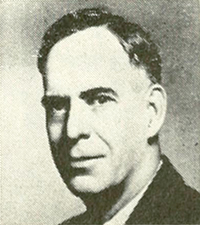 Reginald Lee Harris, lieutenant governor of North Carolina, politician, industrialist, and community leader, was born in Roxboro, one of eight children of William Henry and Rosa Lee Jordan Harris. His father was a merchant and leader in the tobacco and textile community of Roxboro, where the younger Harris resided his entire life.

After attending the Roxboro Central School and the Virginia Military Institute in Lexington, Harris was employed by the Roxboro Cotton Mills and served as president from 1941 to 1956; during the same period he was also president of the Peoples Bank of Roxboro. At his death he was chairman of the board of both organizations. Among his numerous other business affiliations, he served as president of the North Carolina Cotton Manufacturers Association and as a director of the North Carolina Textile Foundation, the Business Foundation, the Home Economics Foundation, and a variety of other business and charitable enterprises.

As a community leader, Harris was especially active in religious, educational, and health affairs. A lifelong member of Long Memorial Methodist Church in Roxboro, he served as treasurer, Sunday school teacher, Sunday school secretary, trustee, and chairman of the official board. He was also an ardent supporter of Grace Methodist Church, which, on 27 Feb. 1967, named its educational building for Harris in recognition of his service. The Person County Memorial Hospital, which opened in 1950, was built largely through Harris's unstinting efforts. He headed the fund-raising drive and saw the project through to its completion; the hospital annex bears his name.

It was in politics, however, that Harris earned his statewide reputation. First elected to the North Carolina House of Representatives in 1927, he served five consecutive terms, and in 1933 he was chosen speaker of the house. The 1933 legislative session proved to be one of the most controversial in North Carolina history, as the state tried to cope with the paralyzing problems of drastically reduced revenues brought on by the depression. Faced with the possibility of closing public schools, the legislature passed the much-debated 3 percent sales tax—against strong opposition—thereby keeping the schools open. Harris was active in that controversy. In 1940 he attained his political pinnacle, winning the Democratic nomination for lieutenant governor. In the general election, Harris and gubernatorial nominee Joseph Melville Broughton received the largest majority ever given candidates for offices in North Carolina. While lieutenant governor, Harris was prominently mentioned as a future gubernatorial candidate, but he never sought the office. Afterwards, he returned to the legislature for two additional terms (1947, 1949).

During his political career, Harris served on many influential panels. He was a member of the legislature's powerful Advisory Budget Commission, chairman of the State Board of Education (1943–45), director of the North Carolina State College Foundation, and for many years a trustee of the Consolidated University of North Carolina. Long active in Democratic party politics, he was a delegate to national conventions in 1936, 1940, and 1944.

In December 1913, Harris married Katharine Jones Long, the daughter of William H. and Rachel Reade Long of Roxboro. They had six children: Reginald L. Harris, Jr., William H. Harris III, Katharine Long (Mrs. N. B. Schloss), Dr. A. Page Harris, Mary Louise (Mrs. Kedar B. Brown), and Betsy Reade (Mrs. Gordon P. Allen). Harris died in his native Roxboro at age sixty-nine following several years of declining health; he was buried at Burchwood Cemetery, Roxboro. Portraits of him hang in the lobby of the Person County Memorial Hospital and in the entrance of the educational building of Grace Methodist Church.