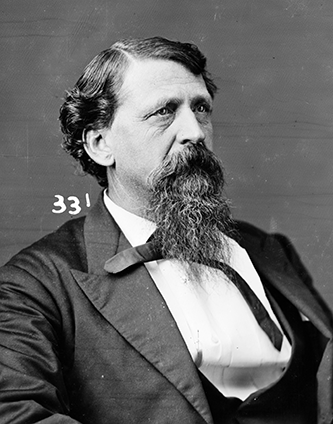 George Emrick Harris, U.S. representative from Mississippi, was born in Orange County, N.C. The family moved during Harris's childhood to Tennessee and eventually to Mississippi; he attended the common schools of both states. After studying law, he was admitted to the bar in 1854 and began to practice in Mississippi. At the beginning of the Civil War he entered the Confederate Army and served as a lieutenant colonel throughout the war. Following the defeat of the Confederacy and the establishment of Reconstruction governments, the Mississippi lawyer was elected a district attorney in 1865 and reelected the following year.

When Mississippi was readmitted to the Union, Harris, a Republican, was elected to both the Forty-first and Forty-second congresses, serving from 23 Feb. 1870 to 3 Mar. 1873. From 1873 to 1877 he was attorney general of Mississippi. Still active in state politics at age fifty, Harris served as lieutenant governor from 1877 to 1879. His longtime involvement in Reconstruction government as a Republican was unusual for a former Confederate officer and probably brought him some of the same social ostracism that haunted General James Longstreet.

A widower, he died of an asthma attack at his home in Washington and was buried in that city's Oak Hill Cemetery, in a grave above Mrs. Harriet S. Harris (1854–9 July 1905), presumably his wife.