Ellwood Scott Harrar, Jr., wood technologist and educator, was born in Pittsburgh, Pa., the son of Ellwood Scott and Lucetta Elsie Sterner Harrar, both former residents of Allentown, Pa. His father, an engineer, was the son of George Washington and Lillian E. Osterstock Harrar, and a grandson of George Harrar who came from England in the early 1800s and settled in Virginia. The family moved to Painesville, Ohio, later to Ashtabula, and then to Youngstown. Young Harrar began his elementary education in Ashtabula and continued in nearby Poland. He was graduated from South High School in Youngs-town and in the fall of 1922, at age seventeen, entered Oberlin College. After one and one-half years, he transferred to the New York State College of Forestry at Syracuse University, from which he received the B.S. degree in 1927. At Syracuse (1926–28) he was an assistant in dendrology and wood technology, and completed the requirements for the M.S. degree.

The following fall Harrar went to the College of Forestry of the University of Seattle, Washington, where for three years he was an instructor in forest products and, subsequently, for three years assistant professor. At commencement exercises in June 1936, he was awarded the Ph.D. degree in forestry at the New York State College of Forestry. That summer he became an original faculty member of the new School of Forestry of Duke University. He served first as associate professor of wood science, then as professor and as dean of the School of Forestry from 1957 to 1967. Retiring from the deanship, he continued as a James B. Duke Professor of Wood Science until his full retirement in August 1974 at age sixty-nine.

Harrar was a member of many professional and civic groups. In 1928 he joined the Society of American Foresters, where he became a Senior Member (1935) and a Fellow (1965), and served as a member of the Committee on Tree Nomenclature and as onetime vice-chairman of the Appalachian Section. He was also a member of the International Society of Wood Anatomists, Forest Products Research Society, North Carolina Forestry Council, American Forestry Association, Forest Farmers Association, Society of Wood Science and Technology, and International Society of Tropical Foresters. Syracuse University awarded him the honorary doctor of science degree in 1961.

In addition to his continuous teaching responsibilities, Harrar was a consultant to the Southeastern Procurement Division, Corps of Engineers, U.S. Army; a consultant on veneers and plywood to the U.S. Army Corps of Engineers; a project coordinator for the Civilian Conservation Corps, state of New Jersey; and a consultant for the Crop Division, Biological Laboratories, U.S. Army, Fort Detrick, Md. He was also a member of President Eisenhower's Bipartisan Committee for Increased Use of Agricultural Products; of the Governor's Advisory Committee for Forestry in North Carolina; and of the Advisory Committee for the Bent Creek Research Center, U.S. Forest Service, Southeastern Forest Experiment Station, Asheville. In 1966, he was cited by the governor for his outstanding contribution to forestry in North Carolina.

On leave from Duke University in 1942–45, Harrar served as chief administrative engineer of the Airplane Division, Curtiss-Wright Corporation, Louisville, Ky. Earlier he was forester of the Society for the Protection of New Hampshire Forests (1928) and research associate of the West Coast Lumbermen's Association, Seattle, Wash. (summers, 1929, 1930).

Through his multiple writings, Harrar made significant contributions to the study of wood science and technology. He was either author or coauthor of the "Douglas Fir Use Book" (1930), "Technology of Papermaking Fibers" (1936), Textbook of Dendrology (1936 and subsequent editions), Guide to Southern Trees (1946; 2d ed., 1962), seven volumes in Hough's Encyclopedia of American Woods, Forest Dendrology (1935), more than sixty-five new or revised articles on timber trees of the world in the Encyclopaedia Britannica, and later adviser in dendrology and forestry to the Encyclopedia Americana. He also wrote numerous articles, research papers, and reviews for technical, professional, and scientific journals in this country and abroad.

Harrar was particularly recognized as an expert on the anatomical, physical, and chemical properties of wood; and on woods of temperate and tropical America, and of Queensland, Australia. While dean of the School of Forestry at Duke University he conceived and put into operation a cooperative program involving Duke and more than sixty liberal arts and sciences colleges in the United States. In this program a student spent three years in preforestry and liberal arts in the cooperating school, then two years in professional forestry study at Duke, receiving a bachelor of forestry degree from his or her original college and a master of forestry degree from Duke.

Further, during his tenure as dean, the faculty of the School of Forestry doubled, and programs of forest business management and of forest production were added to the curriculum. With the financial support of the Ford and Rockefeller foundations, Harrar organized and implemented a five-day Tropical Forestry Symposium at Duke attended by twenty-three internationally known tropical foresters from a dozen countries and three major tropical areas. They met to identify and define, from a world point of view, the chief obstacles to the development of sound policies and practices in tropical forestry. 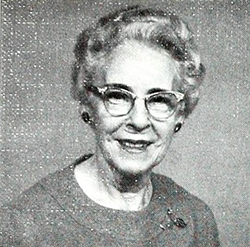 Among his unique contributions to the field of wood science, Harrar collected over forty years' examples of various woods from the world's forested areas. The collection of more than 5,000 specimens was placed, with Duke University's permission, in the DuPont Winterthur Museum, Winterthur, Del., where it can be used in scientific studies by wood scientists from all parts of the world.

For many years Harrar had a hobby of geology. After his retirement from all duties at Duke, he enrolled in classes in gemology at The University of North Carolina at Chapel Hill. He cut and polished several stones, especially prized by himself and his family.

On 10 Sept. 1927, Harrar married Marion Green of Cleveland, Ohio; they had two daughters, Helen Joanne and Carolyn (Mrs. James Michael Wolfe). Early in life he was a Baptist, but later joined a Presbyterian church with his family. He died in Durham and, by his request, his ashes were scattered over his beloved Duke Forest.

American Men and Women of Science: The Physical and Biological Sciences (1967).

Who's Who in American Education: Presidents and Deans of American Colleges and Universities (1967).