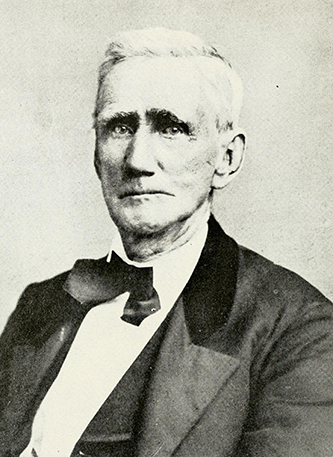 James Harper, merchant and manufacturer, was the son of John Harper II (1767–1839) and Elizabeth Witherow Harper. Born on Butcher Creek in Cumberland County, Pa., he moved about 1815 with his family to Marsh Creek in Adams County a few miles from Gettysburg. He had one brother, John Witherow Harper III. James was the great-grandson of James Harper of County Antrim, Ireland, whose two (of four) sons migrated to Pennsylvania in 1762 and settled at Octoraro in Cumberland County. One of these sons, John, in 1756 married Jean McGaa who bore him seven children, one of whom was John Harper II, James's father.

James Harper settled in North Carolina for reasons of health and business. Suspecting that Harper had tuberculosis, his physician advised him to travel on horseback and to live in the open. A visit in 1827 with his kinsman Samuel Finley in Augusta County, Va., secured an invitation to call on other Finleys in Wilkesboro, N.C. The North Carolina Finleys had a chain of stores extending from Shoun's Crossroads, Tenn., to Columbia, S.C. At their invitation, Harper agreed to establish a partnership with their kinsman, John Waugh, to open a store in Burke County near Fort Grider or Tucker's Barn.

The partnership with Waugh launched Harper on a lengthy business career. The store prospered from its opening about 1827 near the crossing of the Morganton-Wilkesboro and Statesville-Watauga roads. Nearby Harper and Waugh constructed a large tannery where boots and shoes were manufactured, a smithy, a harness shop, a tailor's business, and a carriage manufactory. Later, with Samuel Patterson, Edmund Jones, and James Clarence Harper, Harper established the first cotton mill in the area. People brought cotton to the mill to have it spun into yarn for use in home looms. About 1841 Harper became sole owner of the Fairfield store, and he founded stores near Collettsville and at James Crossroads. Harper's stores bartered for animal skins, hides, herbs, brandy, apples, cotton, and gold dust. These surplus products, and Harper's yarn, were shipped by wagon to Columbia, Charleston, Fayetteville, and Petersburg and sold. In the early years, Harper obtained his store stock largely from Baltimore and Philadelphia. During the Civil War he used Confederate money to purchase large amounts of cotton and store it. When the war ended, he sold the cotton on a rising market to keep himself solvent.

Harper was public-spirited and used the wealth he acquired to benefit the community. He donated the land on which the town of Lenoir was laid out in 1841 and constructed a turnpike in 1845 from Lenoir to Watauga. He also donated land and money to help found Finley Academy in 1857 and Davenport Female College in 1858. In 1852 Harper organized the First Presbyterian Church in Lenoir. He served as postmaster at Fairfield and later for many years at Lenoir, as well as a justice of the peace.

In 1833 Harper married Caroline Ellen Finley (1808–67), daughter of Samuel and Mary Tate Finley of Augusta County, Va. They were the parents of five children: George Washington, Mary E., Cornelia, Samuel, and John (who died in childhood). George became a major in the Fifty-eighth North Carolina Regiment and wrote its history. Samuel served as a clerk to General Albert Potts Hill. For his family Harper constructed Fairfield, named after his former home near Gettysburg.

People who knew Harper commended his kindness to his slaves, his support of temperance, his abstinence from tobacco, his hospitality and generosity, and his quiet dignity. He was buried in the First Presbyterian Church cemetery, Lenoir.