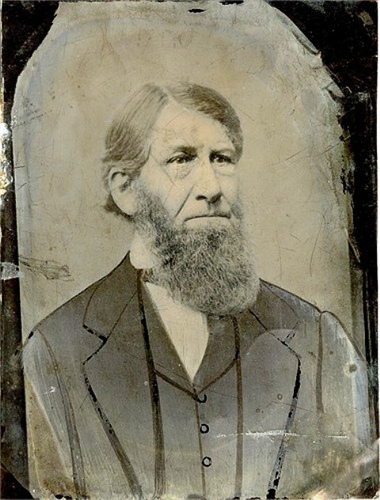 Herndon Haralson, soldier, politician, and planter, was born in what is now Person County, one of thirteen children of Paul and Nancy Lea Haralson. His grandfather had immigrated from Holland to Virginia in 1715. In 1750, Paul Haralson left Virginia and settled on Hyco Creek, a small branch of the Dan River running through present Person County. Young Haralson's formal education was limited. At age nineteen, when the land office of North Carolina was opened, he was appointed deputy surveyor for the newly formed Caswell County. He continued in this position until 1780, when he was appointed deputy clerk of court under Archibald DeBow Murphey, Sr. Murphey soon joined the Revolution and left the office to Haralson. When Cornwallis and his army passed near the county office, the young clerk stored the records in a safe place and then applied for and received a commission to raise a volunteer company of militia. In a few days he assembled a company, equipped it, and joined General Nathanael Greene in Hillsborough.

On 21 Feb. 1781, Captain Haralson attacked a surprised band of Tories under the command of Dr. John Pyle. The battle was a great success: the Tories were "cut to pieces," and 180 of their number were killed. On 2 March, Haralson and his men fought in the Battle of Wetzell's Mill, on the Reedy Fork of the Haw River, followed by a skirmish at Alamance Creek. On 15 March, they saw action in the Battle of Guilford Court House. Haralson then marched with General Greene to Eutaw Springs. In this bloody battle, Haralson was promoted to major and given a command of mounted infantry called the "Marshall Corps." After this engagement, he took 500 prisoners to Salisbury, where he was discharged from the army. He returned to Caswell County, a hero.

Haralson again took charge of the clerk's office in Caswell County until 1784, when he accepted an offer to work as a clerk for the Robert Donald Company, importing merchants in Petersburg, Va. He continued in this position for three years before returning to his former post in Caswell County.

In 1792, the county of Caswell was divided and Haralson took charge of the newly created Person County clerk's office. In 1793, he was elected to the House of Commons. He served four terms in the Assembly up to 1800, after which he declined to run for reelection. That year he was appointed judge of the Superior Court; he also reclaimed his former post of Clerk of Court. Haralson remained in these positions until 1816, when he resigned and moved to Danville, Va. In 1818, he moved to Haywood, N.C., and in 1820, to Tennessee, settling in the wilderness on Forked Deer River. In 1822, as the western district of that state was being organized, he moved to Madison County and from there to Haywood County, Tenn. In 1826 he was made an agent for the Bank of the State of Tennessee. From 1831 until his death, he lived the life of a planter. By that time his possessions and landholdings were fairly extensive. An active Methodist, he was buried in Brownsville, Tenn.

A. R. Foushee, Reminiscences, A Sketch and Letters Descriptive of Life in Person County in Former Days (1921).