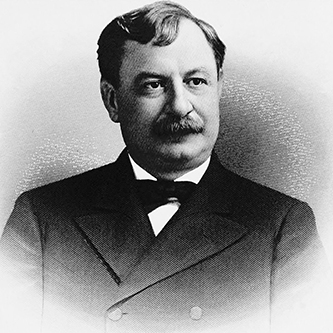 Hezekiah Alexander Gudger, lawyer, educator, diplomat, and jurist, was born in Madison County, the son of Joseph Jackson and Sarah Emeline Barnard Gudger. He was educated in the public school system and at Weaverville College, from which he was graduated in 1869. After studying law at Bailey's Law School, Asheville, he was admitted to the bar in 1871. He married Jennie H. Smith in 1875 and they had five children: Francis, Herman, Ada, Marie, and Emma. The last was the wife of General Robert L. Eichelberger.

Gudger had a varied and distinguished career, making substantial contributions at the local, state, and national levels. He was instrumental in establishing the Buncombe County school system. Later, he served for six years as the head of the state School for the Deaf, Dumb, and Blind in Raleigh from 1877 to 1883.

Politically, he was an ardent Democrat. Elected to the state legislature from traditionally Republican Madison County, he was subsequently elected as a state senator from Buncombe County. In his later years, he switched to the Republican party over the controversial "Sound Money" question. He was well known and widely respected for his abilities as a public speaker and political campaigner.

Gudger served two terms (1891–92) as Grand Master of the Grand Lodge of Masons in North Carolina. He was also active in the Methodist church.

In 1897, he was appointed by President William McKinley as consul general in Panama, a post he held until 1907. He was typically active in Panama and instrumental in negotiating a settlement of the revolution that had rocked the country for more than three years. In 1907 he was appointed a justice of the supreme court of the Canal Zone. He was later appointed chief justice, resigning from that position in 1914, when he returned to Asheville. Gudger was active in local affairs until his death at age sixty-eight.

"Masons Instrumental In The Creation of Sojourners' Lodge In The Canal Zone." The Panama Canal Orient [Panama Canal Scottish Rite Bodies Ancient and Accepted Scottish Rite of Freemasonry] 61, no. 15. (January-June 2009). 5. http://www.pcscottishrite.org/files/OR611.pdf (accessed May 6, 2013).

Avery, Ralph Emmett. The greatest engineering feat in the world at Panama. Authentic and complete story of the building and operation of the great waterway--the eighth wonder of the world. New York, Leslie-Judge Co. 1915. Revised & enlarged edition. 75. https://archive.org/stream/greatestengineer00averrich#page/74/mode/2up