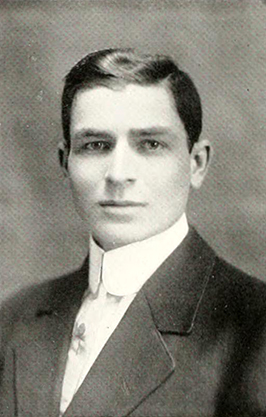 Philip Palmer Green, army medical corps officer and pathologist, was born in Davidson County, the second of six children of Robert S. and Nettie Lopp Green. His education began in a one-teacher public school, after which he completed the eighth grade in the new Thomasville graded school, attended for one year a private class taught by H. W. Rinehart, formerly president of Thomasville Female College, and met college entrance requirements at Liberty Piedmont Institute. He received B.S.(1912) and M.S. (1913) degrees from Wake Forest College, where he was a laboratory assistant in chemistry (two years) and anatomy (one year), graduating with honors in premedical courses. In September 1912, he entered Washington University Medical School, St. Louis, Mo.; he was graduated with an M.D. degree in 1914. After serving a two-year internship in St. Louis Children's Hospital, he was an assistant to Dr. Ernest Sachs, head of the neurology department at Washington University and a pioneer in brain surgery.

When the United States declared war with Germany in April 1917, Green joined the St. Louis hospital unit that reached France on 1 June. He first served in a British hospital at Rouen. Later that year he was accepted in the U.S. Army Medical Corps and was stationed at general headquarters in Chaumont. In July 1918, at his request, he was assigned frontline service with the Forty-second (Rainbow) Division near Reims. Seriously wounded by shrapnel from a bursting shell, he was sent back to U.S. hospitals in October 1918. After twenty months of treatment and surgery, he was sufficiently recovered to resume active duty.

Green made research his specialty and was certified in both bacteriology and pathology. He was recognized in the fore of medical corps pathologists. Between the two world wars he was stationed in a number of large service hospitals in this country and for one three-year term at Schofield in Hawaii. In 1940, he was sent for a second stay in Hawaii—this time at Tripler General Hospital, Honolulu. On Pearl Harbor day and afterward, he treated the many wounded in the attack. It is recorded that not one of those wounded died of infection. A year later he was appointed commanding officer of North Sector General Hospital at Schofield Barracks, the largest infantry hospital in the Pacific. There he provided skilled supervision until the end of the war. After his return to the United States, he was stationed at Fort Hamilton, N.Y.; Fort Lewis near Tacoma, Wash.; and, finally, at Fort Bragg, N.C. From his enlistment rank of first lieutenant in 1917, he had advanced to full colonel in World War II.

After his retirement in 1952, Green was a pathologist at Moore Memorial Hospital in Southern Pines, N.C., for eighteen years. During that period he saw the hospital doubled in capacity and staff. For two terms he served as chief of staff. As chief pathologist he elicited large gifts of equipment that provided especially up-to-date means of diagnosis leading to cures.

During his long life Green enjoyed hobbies, especially photography, in which he won awards; fishing, in all the waters near his many places of residence; and crafts, of which building superior walnut gunstocks occupied his later years. His reading was so extensive that he could speak with authority on almost any subject. He was a Mason and, at Southern Pines, an active member of the Rotary Club. Colonel Green and his wife were buried in the Thomasville City Cemetery.