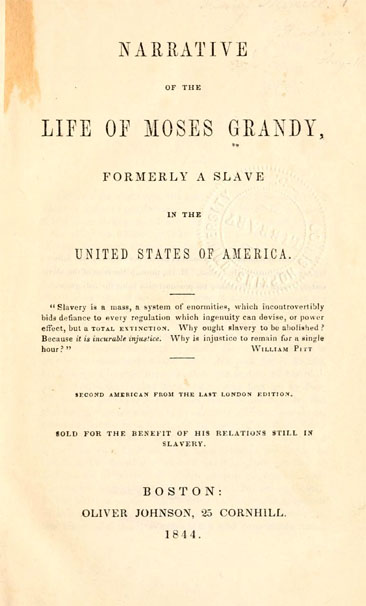 Moses Grandy was a skilled seaman and black antislavery activist born into slavery around 1786 in Camden County, North Carolina. He changed hands between several enslavers working along the Albemarle Sound and Dismal Swamp until he bought his freedom, moved to Boston, and published an antislavery autobiography. Most of the details of Grandy's life are known only from his autobiography, Narrative of the Life of Moses Grandy; Late a Slave in the United States of America. Because Grandy could not read or write, he orated his autobiography to George Thompson, a London antislavery activist with ties to William Lloyd Garrison and the New England Anti-slavery Society, while on a trip to London. And although Grandy's narrative was published as antislavery propaganda, other accounts of slavery in North Carolina at the time verify its major points. He also hoped to purchase his family members' freedom with proceeds from the sale of his narrative, and his struggle for freedom and Narrative contributed to the push for the abolition of slavery in the nineteenth century.

Moses Grandy was born in Camden County, North Carolina around 1786, although the exact date was unknown as he explained in his narrative since masters did not keep records of enslaved peoples' births.  He described his first enslaver, Billy Grandy, as a hard-drinking man.  Moses recalled that in his early childhood his mother hid him, along with eight siblings, in the woods to prevent Billy Grandy from selling them.  Billy Grandy eventually persuaded her to return by promising not to sell her children but soon after sold all except Moses. When Moses' mother protested her childrens’ sale, she was flogged as punishment. After being sold, many of Moses' siblings were treated harshly by their new enslavers; one of his brothers was given very little food and clothing and died while searching for his enslaver's cattle.

Young Moses often played with his enslaver's son, James Grandy, who was close to Moses in age. Billy Grandy promised to will Moses to James upon his death, and James subsequently inherited Moses around 1794. While James was young, Moses was hired out annually to various owners until he and James were twenty one years old. During this time, Moses endured varying levels of abuse at the hands of several enslavers. The first enslaver to whom Moses was rented was a Mr. Kemp. Moses reported that Kemp gave him sufficient food and clothing and treated him relatively well. However, the second enslaver, Jemmy Coates, severely wounded Moses with a whip. Moses' third enslaver, Enoch Sawyer, did not give Moses enough food or clothing; however, his next enslaver, George Furley, fed and clothed him well. Moses' fifth and final renter, John Micheau, was an abusive gambling addict. On one occasion, he kept Moses awake five nights in a row to wait on a gambling table, and when Moses began to fall asleep, Micheau beat Moses with a shovel until it broke. Moses ran away and was hired by Richard Furley. He gave Moses a pass to work for himself while making regular payments to Furley, enabling Moses to make and save some extra money. When James was twenty one, he repossessed Moses, and Moses went to work on canal boats for a man named Mr. Grice, the husband of James Grandy's sister. Noticing that Moses was hard-working, James made Moses pay him almost twice what Furley had.

In his autobiography, Moses recounts how he and other enslaved people were frequently separated from loved ones. In what Moses described as a normal occurrence for an enslaved person whose enslaver was in debt, Moses' brother Benjamin was sold to pay off his enslaver's debts, after which Moses never saw him again. Moses' elderly mother, who was living in a hut in the woods at the time, was grief-stricken at Benjamin's sale. Later, Moses married another enslaved person, and she was sold eight months later. Although he said he had loved her deeply, he was never able to see or hear of her again.

Seeing that Moses was making money quickly and had become a captain on the canal boats, Grice suggested that Moses try to buy himself, and persuaded James Grandy to allow Moses to purchase his freedom for six hundred dollars.  Following payment by Moses for his freedom, James then sold him to Trewitt.  Mrs. Grice sued James in Moses' name, but the court ruled in James' favor.  Trewitt agreed to allow Moses to buy his freedom with another six hundred dollars, and after two and a half years of work, Moses had saved the money. However, just before Moses could buy his freedom, Trewitt went into debt and sold him to a man described in the narrative as “Mr. Mews”, who may have been William T. Muse, an enslaver from Pasquotank County (and possibly the father of Confederate Naval Officer, William T. Muse). Mews then sold him to Enoch Sawyer, under whose ownership Moses married his second wife.  Moses reports that remarriage after separation from a spouse was common among enslaved people; Christian ministers had decided that such separation was equivalent to separation by death, and subsequent remarriage was therefore acceptable.

Moses describes how his overseer under Sawyer was an abusive man named Brooks, who had once beaten a pregnant slave to death without punishment. Moses soon tried to buy his freedom a third time. A man named Minner, for whom Moses had worked in the canals, offered to buy Moses and let Moses pay him back for his freedom. Wiley McPherson, reported by Moses as an enslaver notorious for severely beating slaves and pouring salt water into their wounds, even advocated for Moses, arguing that he should be freed because he had paid for his freedom so many times. Sawyer finally allowed Minner to buy Moses who then worked on canal boats for three years to repay Minner.  After gaining his freedom, Moses worked on boats traveling to New York and Philadelphia. When Minner died, Moses moved to Boston to avoid capture and re-enslavement, which was common in Southern states after the death of a former enslaver. In Boston, Moses continued to work on boats until he had saved three hundred dollars and bought his wife, who came to live with him there.

In 1831, Nat Turner's slave insurrection erupted. Though the insurrection was unsuccessful, it made enslavers fear further rebellion, leading them to be especially hard on their enslaved people.  Knowing many of his children remained enslaved, Moses worked and saved money to buy their freedom. He bought his son for four hundred and fifty dollars, and discovered that six of his other children had been sold in New Orleans.  Of these, two of his daughters, Catherine and Charlotte, bought their own freedom. However, Charlotte's children, Zeno, Antoinette, Joseph, and Josephine, remained enslaved, priced at two thousand four hundred dollars. The only other child of whom Moses knew was Betsy, whose enslaver was willing to sell her for five hundred dollars. Moses' father had been sold away when he was young, and his mother remained enslaved until she reached old age and retired in a hut in the woods. His oldest sister lived in Elizabeth City and had five children. His sister Tamar had run away, been recaptured, and had eight children.  Aside from them, Moses knew nothing of his other family members. This was a common experience of enslaved people because they had no personal family names by which they could be traced. He concluded his autobiography by expressing gratitude to his friends for their help in securing his and his family's freedom and his hope for the abolition of slavery.

The narratives of enslaved people like Grandy's were used by the anti-slavery and abolitionist movements in the United States and Britain as testimony to the cruelty of slavery and the humanity of enslaved and freed black people. Grandy’s straightforward account of the horrors he experienced on his path to freedom helped demonstrate to Americans the barbarity of slavery.  Grandy’s narrative was first published in an 1843 edition and then published in three subsequent 1844 American editions. Although some of the details of narratives of enslaved people like Grandy have been called into question by contemporaries and twentieth-century historians, several of Grandy's statements can be verified by other sources. His claims that enslaved peoples' birth dates are difficult to pinpoint, that the sale of children from their parents and separation of spouses were common, that masters sometimes poured salt water on enslaved peoples' wounds, and that Nat Turner's slave insurrection led to harsher treatment of enslaved people are all verified by several other accounts.

After Britain abolished slavery throughout its colonies in 1833, it became common for black abolitionists to tour the British Isles, including Ireland. Frederick Douglass and Moses Roper, another North Carolina freedman, were among those who visited Britain in the 1830s and 1840s. It was during Moses’s 1843 travels to Britain that he recounted his autobiography to his co-author, transcriber, and antislavery activist George Thompson. On the same trip, he advocated against slavery and raised money to free family members. Little is known of Moses’s life outside of the details in his autobiography, including the years following its publication and his death.