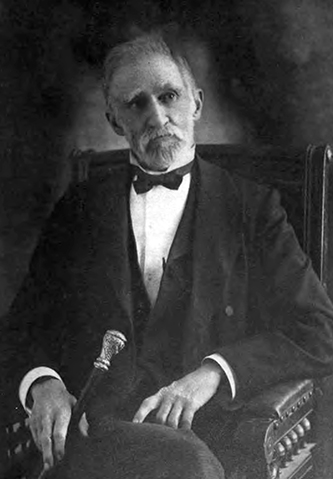 Robert Simonton Gould, attorney, Confederate officer, and judge, was born in Iredell County, the son of Daniel and Zilpha Simonton Gould. His father, who was a New Hampshire native and a Presbyterian minister, died when Robert was seven, after which his mother moved the family to the university town of Tuscaloosa, Ala., where she opened a boarding house.

In 1840, at age fourteen, Gould entered the University of Alabama and was graduated four years later. In 1845, he started to read law, but his studies were interrupted by his appointment to a tutorship in mathematics at the university. In 1849, he left the university faculty and, in partnership with former Alabama Governor Joshua L. Martin, opened a law practice in Macon, Miss. The following year he moved to Centerville, Tex., and in 1853 was elected district attorney of the Thirteenth Judicial District, serving for two terms. In 1855 he married Lenna Barnes, a native of Georgia.

Gould was a member of the Texas Secession Convention of 1861. In the same year, he became judge of the Thirteenth Judicial District, but in early 1862, he resigned his judgeship and joined the Confederate Army. He served as a major in a battalion known as Gould's Battalion, and participated in the Mansfield, Pleasant Hill, and Jenkin's Ferry battles. In the latter engagement he was seriously wounded. By the war's end he had been promoted to the rank of colonel.

After the war, Gould resumed his legal practice. In 1866, he was again elected judge of the Thirteenth District, but his election was invalidated by Reconstruction military officials on the grounds that it was detrimental to a successful reconstruction. Gould spent the next three years at his farm. In 1870, he moved his law practice to Galveston. In May 1874 he was appointed associate justice of the Texas Supreme Court to fill the unexpired term of Judge Peter W. Gray, and in 1876 he was elected to a six-year term on the court. In 1881, after the resignation of Chief Justice George F. Moore, Gould was appointed to a one-year term as chief justice. In 1882, he failed to receive the Democratic party's endorsement as a candidate for a full term as chief justice; however, before his one-year appointment expired, Gould was appointed to the law faculty of the newly opened University of Texas. He served on the faculty until the spring of 1904.

During his tenure on the bench, Gould delivered a number of important decisions. Among them were his dissenting opinion in Ex Parte Towles (48 Texas 413) and majority opinions in Yancy v. Battle (48 Texas 46), Johnson v. Harrison (48 Texas 257), and Veramendi v. Hutchins (48 Texas 531).

Gould was a member of the Free Presbyterian Church of Austin and was buried in that city.