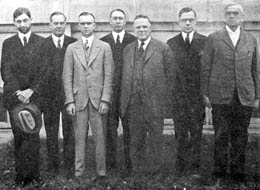 Allen Howard Godbey, minister and educator, was born in Pettis County, Mo., the son of William Clinton and Caroline Smith Godbey. At the age of fourteen he suffered a severe attack of brain fever, which lasted three or four weeks. Godbey received his early education at home, and in 1883 was graduated by Morrisville (Mo.) College, where he was a brilliant student. Afterward he taught at Morrisville for three years and then moved to St. Louis to become assistant editor of the Southern Methodist. During this period he was the author of several books.

In 1895, Godbey joined the Southwest Missouri Conference of the Methodist Episcopal Church, South, and served as a pastor for four years. Later he was transferred to the St. Louis Conference and served city pastorates for eight years. However, he was best known for his proficiency in Semitics and his work as an educator. After serving as principal of the academy at Central College from 1899 to 1902, he went to the University of Chicago as a fellow in Semitics; he was awarded the Ph.D. in 1905. From 1906 to 1909 Godbey was president of Morrisville College.

In 1926, when the Divinity School of Duke University was established, Godbey accepted the chair of professor of Old Testament and continued in that position until his retirement in 1932. Over the years he became well known as an archaeologist and historian; he also maintained a strong interest in the affairs of his church, attending numerous conferences and religious gatherings. He was a member of the American Oriental Society, the Society of Biblical Literature, and a number of other learned societies that promoted biblical and archaeological research. Among his writings were Code of Hammurabi (with R. F. Harper), The Lost Tribes, A Myth, New Light on the Old Testament, and several other volumes. Despite his brilliance, Godbey was somewhat eccentric, and there was speculation that his erratic behavior at times was the result of the brain fever he had suffered as a lad. On 16 June 1892 he married Emma L. Moreland, and they had one daughter, Elizabeth Beulah (Mrs. Glenn W. Johnson).

While attending the 1948 meeting of the General Conference of the Methodist Church in Boston, Godbey was struck by a truck as he crossed the street on the way to his hotel after the evening session on 7 May. He died a few hours later. Following funeral services in Durham, he was buried beside his wife in New Bethlehem Cemetery, St. Louis.

The Methodist Church, Minutes of the St. Louis Conference (1948).