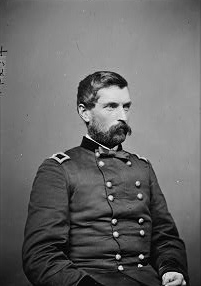 John Gibbon, career soldier, was born near Holmesburg (now within Philadelphia), Pa., the son of Dr. John Heysham and Catherine Lardner Gibbon. The family soon moved to Charlotte, N.C., where John obtained an appointment to the U.S. Military Academy. He was graduated twentieth in the thirty-eight-member class of 1847. Commissioned into the artillery too late for active fighting in Mexico, he spent the next fourteen years in a succession of routine peacetime assignments highlighted by five years at West Point teaching artillery tactics. He was promoted to captain in 1859.

A staunch Unionist in the secession crisis, Gibbon had predicted that North Carolina would secede "quietly." Three of his brothers joined the Confederacy and a sister waited until the summer of 1864 to pass northward through the lines. The outbreak of the Civil War found Gibbon stationed in the Utah Territory. Shortly after his arrival in Washington, D.C., late in the summer of 1861, he obtained command of the artillery of General Irvin McDowell's division, Army of the Potomac. Unlike many regulars, Gibbon flourished in the difficult task of whipping raw volunteers into trained soldiers. Ironically, his advancement to brigadier general (volunteers) was delayed until May 1862, because there were no North Carolina congressmen available to press his case. He subsequently led the Black Hat Brigade (First Corps) in the battles of Groveton, Second Bull Run, and Antietam with such distinction that the unit was renamed the "Iron Brigade" and he was elevated in November 1862 to head a First Corps division. Although pleased with the promotion, Gibbon was angered when his superior, General Joseph Hooker, nominated the politically potent but militarily unfit Solomon J. Meredith to succeed him as commander of the Iron Brigade. Gibbon's own politics were conservative Unionist; he respected General George B. McClellan and was personally close to General George G. Meade.

In the First Corps' attack on the Confederate right wing at Fredericksburg, Gibbon was wounded and had to give up his division. He took charge of another in the Second Corps when he returned to duty. The unit participated in the successful assault on Marye's Heights in the Chancellorsville campaign of May 1863. Twice during the Gettysburg campaign of June and July he assumed temporary command of the Second Corps. Because he enjoyed the esteem of General Meade, the army commander, he was included as a voting member of a corps commanders' council after the second day of heavy fighting at Gettysburg. The next day, both Gibbon and his superior, General Winfield S. Hancock, were severely wounded in the Second Corps's successful repulse of the Pickett-Pettigrew-Trimble charge. 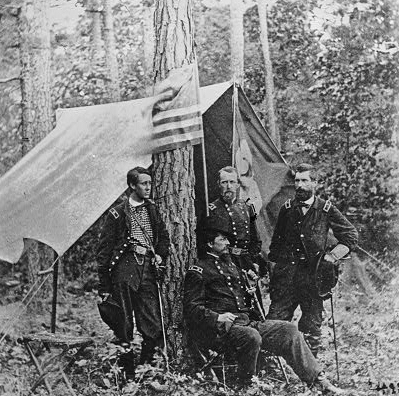 Gibbon spent most of the fall and winter of 1863–64 recuperating in the successive command of conscript depots in Cleveland and Philadelphia. He managed to be present for Abraham Lincoln's dedicatory address at the Gettysburg National Cemetery and to defend both verbally and in print his friend and commander, General Meade, who labored under heavy Republican criticism for his alleged failure to follow up the victory at Gettysburg. Even after Meade's death, Gibbon continued defending his reputation by collecting testimony from fellow officers.

Although an experienced divisional commander and despite the fact that Meade had him in mind to succeed General John Sedgwick as commander of the Sixth Corps, Gibbon was made a major general only in June 1864 and only after Lieutenant General Ulysses S. Grant—in command of all federal armies since the preceding March—recommended him. Gibbon had been too proud to beg promotion from Secretary of War Edwin M. Stanton.

Gibbon's division sustained losses of 47 percent in the desperate May–June 1864 fighting from the Rapidan to the James; at one time or another it had nine different brigade and forty regimental commanders. By July and the early phases of the siege of Petersburg, the unit was badly worn down and Gibbon's relations with General Hancock, formerly cordial, had become acrimonious. On 25 August the command suffered a humiliating setback at Reams' Station, an engagement it would have won easily in its prime. Gibbon felt obliged to divest three regiments of their battle standards. But neither Reams' Station nor the quarrel with Hancock deprived him of Meade's and Grant's confidence; he was soon given temporary command of the Eighteenth Corps, Army of the James. Returning reluctantly to his old assignment and still sensitive about Reams' Station, Gibbon protested the appointment of General Andrew A. Humphreys to replace Hancock in the Second Corps as a slight to himself. But he was soon assuaged when in January 1865 he took permanent command of the Twenty-fourth Corps, which contained most of the newly reorganized Army of the James's white troops. The corps was conspicuous in the Appomattox campaign, and Gibbon was recognized by being named to head a three-general commission to oversee the formal capitulation of the Confederate Army of Northern Virginia.

During the half-year immediately following the close of the fighting, he commanded the Nottoway, Va., occupation district. However, the termination of wartime generals' commissions in early 1866 plummeted him back to captain. Fortunately, when the regular army was reorganized later that year he was given the colonelcy of the Thirty-sixth Infantry. In 1869, he took over the Seventh Infantry, which participated seven years later in General Alfred H. Terry's Little Bighorn campaign against the Sioux. Gibbon's troops were the first to reach the scene of the Custer massacre about two days after it had happened. The next year, on 9-10 Aug. 1877, the Seventh Infantry intercepted and surprised Chief Joseph and the Nez Percé at Big Hole Basin, Mont., when that tribe was trying to fight its way northeast from the Idaho Territory to sanctuary in Canada. After a very hard fight in which Gibbon was wounded, the Indians withdrew when General Oliver O. Howard approached from the west.

Promoted to brigadier general (regular) in 1885 and given command of the Department of the Columbia, Gibbon and his troops from Fort Vancouver, Wash., restored order in Seattle when the town was wracked by anti-Chinese turmoil. Retiring from the army in 1891, he spent his last years in Baltimore, Md., the home of his wife, Frances North Moale, whom he had married in 1855. His fellow Civil War veterans honored him with the command of the Loyal Legion.

Over a long, active career Gibbon did a surprisingly large amount of writing including The Artillerist's Manual (1860). His war memoirs, fair-minded, straightforward, and often vividly descriptive, are among the best of the genre. They show him to have been a loyal, diligent subordinate, little given to speculation about grand strategy. Although he did not regret his adherence to the Union, his postwar relationships with Confederate friends from the old army, such as his classmate Henry Heth, were cordial.

George W. Cullum, Biographical Register of the Officers and Graduates of the U.S. Military Academy at West Point, 3 vols. (1891).