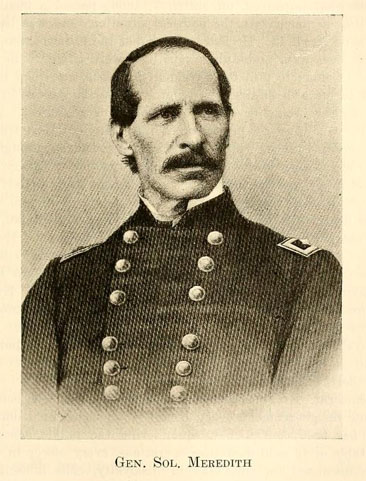 Solomon Meredith, Civil War general, sheriff, legislator, U.S. marshal, surveyor general, and livestock breeder, was born in Guilford County. The youngest of twelve children and a six-foot, six-inch giant in his time, he left North Carolina in 1829 at age nineteen and walked to Wayne County, Ind. In Indiana his occupations expanded quickly in number. Starting out as a woodchopper, he later became a store clerk and then in 1834 and 1836 was elected sheriff of Wayne County. In 1838 he began a mercantile business in Milton, Ind., continuing it in Cambridge City from 1839 to 1843.

During the years 1846–48 and 1854–56 he served in the state legislature. As a delegate to the Whig National Convention in 1840, he was an ardent supporter of William Henry Harrison for the presidency. He was appointed U.S. marshal for the Indiana District in 1849 by President Zachary Taylor and held this position until 1853, when he was removed by President Franklin Pierce, a Democrat. As a Whig, Meredith had worked hard for the election of General Winfield Scott to the presidency in 1852. One of the first to join the new Republican party, he was a delegate to the convention in 1856.

Meredith was active in improving the educational system in Indiana, as well as in making public improvements. He was director and financial agent for the Indiana Central Railroad, going to England to hire many workers. Later he was president of the Cincinnati and Chicago Railroad Company. From 1859 to 1861 he was clerk of the courts in Wayne County.

On 29 July 1861 Meredith became colonel of the Nineteenth Indiana Infantry; he first saw action at Gainesville, Va., where he was wounded. He commanded his regiment at Antietam and was promoted to brigadier general of volunteers on 6 Oct. 1862. He commanded the "Iron Brigade," which consisted of one Michigan, two Indiana, and three Wisconsin regiments, at Fredericksburg, Chancellorsville, and Gettysburg, where he was severely wounded. Early in 1864 he was put in command of the military post at Cairo, Ill., and later that year he became commander of the District of Western Kentucky at Paducah, serving in the latter position until the end of the war. On 14 Aug. 1865 he was brevetted major general of volunteers.

After the war Meredith became U.S. assessor of internal revenue for his district (1866–67) and surveyor general of the Montana Territory (1867–69). He then retired to his farm, Oakland Place, near Cambridge City, Ind., where he became active in the breeding of improved livestock, especially shorthorn cattle and Southdown sheep. He imported animals from England and was a prominent exhibitor at the leading agricultural fairs.

Meredith is mentioned in the Quaker records of North Carolina. Although born into that sect, he became associated with the Methodist Episcopal church, where his children were baptized. In addition to having been a member of the Society of Friends, he held fraternal membership in the Masonic order and the Independent Order of Odd Fellows.

In 1836 he married Anna Hannah, the daughter of Samuel C. Hannah, who was born in Pennsylvania in 1812 and moved to Wayne County. They had four children. Samuel Hannah, the oldest, died in 1864 as a result of injuries received in the Civil War. David Macy, a captain in the war who was brevetted for courage at Chickamauga, died in Mobile, Ala., on 4 Apr. 1867. Henry Clay (17 July 1843–5 July 1882) established the Cambridge City Tribune before becoming a partner with his father in raising pedigreed livestock; he married Virginia Claypool, the daughter of Austin B. and Hannah A. Petty Claypool, and they had no children. Mary, the only daughter and the fourth child, died in infancy.

Henry Clay Fox, Memoirs of Wayne County and the City of Richmond, Indiana (1912).

Francis B. Heitman, Historical Register and Dictionary of the United States Army, vol. 1 (1903).