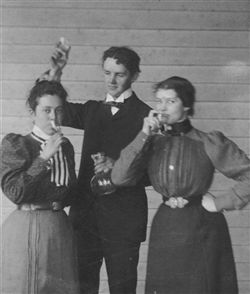 Francis Beers Gault, lumberman, was born in St. Peter, Minn., the oldest child of Zuriel Samuel and Mary Lincoln Lampman Gault. He was a descendant of the Woolseys of Long Island, thought to be the oldest family of English origin in New York State; of Philip Pinckney of Eastchester; of the Burr, Sturges, Ogden, and Beers families of Fairfield, Conn.; and of Major Simon Willard, the Reverend Thomas Carter, and the Otis, Joslin, Wilder, and Lincoln families of Massachusetts. Gault attended Gustavus Adolphus College and during spare time and in the summers worked with engineering location crews in central South Dakota and in the Black Hills. At the age of twenty he became acting city engineer of St. Peter. In 1907 he moved to Columbus County, N.C., where he joined his granduncle, Charles O. Beers, in shingle and lumber manufacturing and became an ardent North Carolina booster and lifelong proponent of the state's people, traditions, products, and multifaceted progressiveness.

For more than two decades Gault was president and general manager of the North Carolina Lumber Company, maintaining salesman in Baltimore, Md., Trenton, N.J., and Philadelphia, Pa. Though himself caught in serious financial straits during the Great Depression of the 1930s, he was able to look after his several hundred employees, both white and black, during the more than two years that his mills were shut down. For many years he was a director of the Peoples Savings Bank and Trust Co., Wilmington, and of the Southern Pine Association. He was also a member of the National Hardwood Lumber Association. In his last years after retirement he served as chairman of the Columbus County school board. A member of St. James's Episcopal Church, Wilmington, he also was a 32° Mason and a member of various social clubs.

In 1909 Gault married Susie Bell LaMotte of Wilmington, and they were the parents of four children: Charles Beers, Mrs. Miriam Ashe Holt, Mary Lampman, and Francis Alexander. After his death of heart failure, he was buried in Oakdale Cemetery, Wilmington. The site of his home at Lake Waccamaw is now the Boys Home of North Carolina.