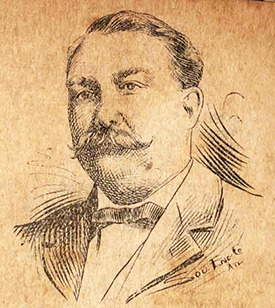 Samuel Mallett Gattis, attorney and public official, was born in Orange County about two and a half miles north of Chapel Hill, the son of Samuel Gattis, a well-to-do farmer, and his wife Nancy. His great-grandfather, John Gattis, who arrived in North Carolina from Pennsylvania in the mid-eighteenth century, was the first of the family to settle in the state. Both John and his son Alexander fought in the American Revolution and were respected members of the community; Alexander was one of the founders of the Orange Methodist Church and a justice of the peace for Orange County.

After attending public schools, young Samuel went to Chapel Hill and for two years attended a college preparatory school conducted by a Reverend Mr. Heitman. In 1880 he entered the freshman class at The University of North Carolina. Although his time was limited because of the financial necessity that he work, he was graduated with a bachelor of philosophy degree in June 1884. For the next three years he was employed as a school principal, first at Wentworth Academy, Johnston County, and then at Hertford Academy, Perquimans County, before he decided to study law. In 1887 he entered the university law school where his preparation under the direction of John Manning enabled him to be licensed by the North Carolina Supreme Court in the February term of 1888. Gattis immediately set up a practice in Hillsborough. The following December Judge Gilmer appointed him clerk of the Orange County superior court to fill the vacancy left by the resignation of Dr. Pride Jones. Gattis was elected to the office in 1889 and served until 1894.

About the same time that his legal career began, a long political career was also blossoming. In 1888, he was elected chairman of the Orange County Democratic executive committee as well as a delegate to the Democratic National Convention in Kansas City. He would hold the latter post again in 1924, when the convention met in New York City.

Gattis resumed the practice of law after leaving the superior court clerkship in 1894. Four years later he was elected to the General Assembly where he represented Orange County in the sessions of 1899, 1901, and 1903; in the latter year he was speaker of the house. In the legislature Gattis rendered untiring service as chairman of the Committee on Cities and Towns and of the committee investigating the management of North Carolina's prisons, as well as a member of the committees on education, printing, judiciary, elections, and penitentiary. Afterward, he returned to his practice in Hillsborough. Apparently because of his ability at the bar, he was elected solicitor of the Ninth Judicial District in 1909 where he remained until the lines were changed in 1913. He then held the same office in the Tenth Judicial District for ten years—serving with distinction as solicitor for a total of fourteen years. In 1923 he once more took up his private law practice.

Although unquestionably his chief interests, Gattis did not confine himself solely to politics and law. As a former teacher and supporter of public education, he was a member and chairman of the executive committee of the Normal and Industrial College in Greensboro and a trustee (1907–11) of The University of North Carolina, his alma mater. He also was a charter member and a director of the Bank of Orange. A Mason, he was a member of Eagle Lodge in Hillsborough and served as Grand Marshall, Grand Senior Deacon, Grand Junior Warden, and Grand Senior Warden (1908–9) of the Grand Lodge of North Carolina. He was affiliated with the Methodist Episcopal Church, South, and a member of the Hillsborough Methodist Church where for many years he was a steward.

On 3 Dec. 1890 Gattis married Margaret Williams Parish of Hillsborough, and they were the parents of one child, Samuel Mallett, Jr. Gattis died at his home in Hillsborough and was buried in the town cemetery.