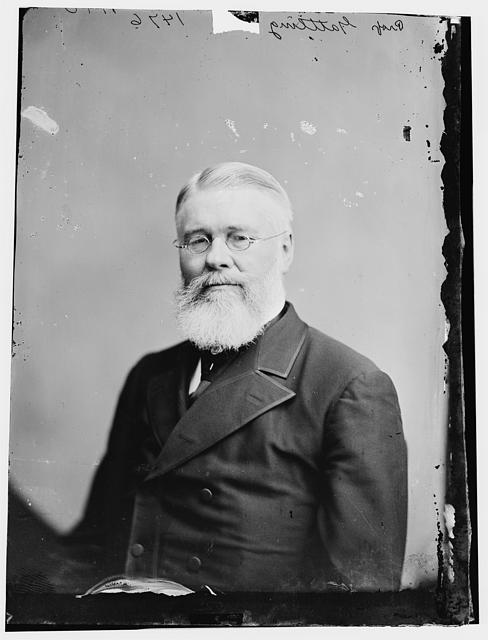 Richard Jordan Gatling, inventor, was born in the Maney's Neck section of Hertford County. His father was Jordan Gatling, an enslaver who owned a plantation spanning more than a thousand acres, and his mother was Mary Barnes Gatling. Richard Jordan had three brothers -- Thomas Barnes, James Henry, and William Jesse -- as well as two sisters -- Mary Ann and Martha Sarah.

Richard Gatling had a brief formal education at Buckhorn, a local common school. He went on to become a schoolmaster but left teaching to open a country store near the town of Winton. During this period, Gatling began his inventive practice. Invention was central to the Gatling family’s identity, and so it was in a climate of intellectual curiosity that Richard Gatling was reared. Richard’s father, Jordan, was himself an inventor and in 1835 patented machines for planting and for thinning cotton. James Henry, Richard’s older brother, was interested in heavier-than-air flight by man and in the 1870s constructed a crude hand-powered aircraft with which he experimented unsuccessfully; he also invented and patented devices for chopping cotton stalks and for converting pine into lightwood. In 1839, Richard conceived of a screw propeller as a substitute for the slow and cumbersome paddle-type wheels that were then in use. Unfortunately, when Gatling went to patent his screw propeller, he learned that the celebrated Scandinavian-American inventor, John Ericsson, had already patented a near-identical invention.

Gatling obtained his first patent in 1839 for a rice-seed planter. Soon after, in 1844, he moved to St. Louis. There he converted his machine to a wheat-planter, or “wheat drill,” which was  successful in the midwestern wheat fields. During the winter of 1845, Gatling contracted smallpox while on a business trip by riverboat and was unable to obtain medical attention for two weeks.. Upon recovering from this near-fatal illness, he decided to study medicine to be able to care for himself and his family. Gatling attended both Indiana Medical College and Ohio Medical College and received a diploma as a physician in 1850, although he did not go on to practice medicine in any public capacity.. Gatling moved to Indianapolis and continued to invent devices primarily for agricultural use, including a hemp breaking machine in 1850 and a steam plow in 1857.

The outbreak of the Civil War stimulated Gatling to produce his most well-known and one that revolutionized warfare. This was the machine battery gun often known as the "Gatling gun."

At the beginning of the Civil War, Gatling visited the trains bringing in dead and wounded troops from the battlefields and army camps. From his examinations, he learned that only three out of eighteen died from their bullet wounds; the remainder died from fever, pneumonia, and other illnesses contracted in camp. The loss of life due to illness led Gatling to postulate that  if a weapon could be devised to shoot more bullets, fewer men would be required to fight wars and, therefore, fewer and smaller concentrations of men would be necessary. This, he contended, would cut down the rate of death by both illness and combat.  Thus, Gatling invented his gun in an effort to reduce the number of men required to fight wars and thereby reduce the incidence of death. He also hoped that the terror created by such a weapon would tend to discourage war altogether.

The first gun was tested and patented in 1862. Although crude, it had a firing capacity of more than 200 rounds a minute. There is some evidence that this early model was used by Union forces on the James River near Richmond on May 6 1864, but this is contested. Gatling worked diligently to refine his invention, and in 1865 an improved model was patented. Twelve guns of this model were subsequently manufactured and submitted to the U.S. Army for tests. On August 21, 1866, more than a year after the surrender at Appomattox and the day after President Johnson officially proclaimed the end of the Civil War, the Gatling gun was officially adopted by the War Department.

Gatling married Jemima Sanders, the daughter of Dr. John H. Sanders of Indianapolis, in 1854. The couple had four children: Mary S. (b. 1855), Ida (b. 1858), Richard Henry (b. 1870), and Robert B. (b. 1872). Gatling was a member of the Methodist church throughout his life. He was reported to have been a member of the Order of American Knights, an organization that opposed Union war efforts which was regarded as treasonable by the federal government, in Indiana in 1864. He died in New York City at age eighty-four. He and his wife were buried in a family plot in Crown Hill Cemetery, Indianapolis, Indiana.