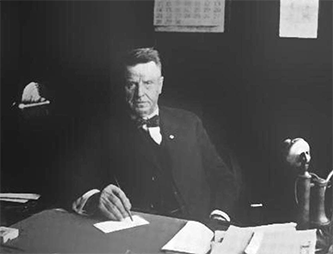 Paul Garrett, wine producer, was born in Edgecombe County, the son of Dr. Francis Marion Garrett, a Confederate surgeon, and Della Elizabeth Williams Garrett. His twin brother, Phillip, died at the age of six months. Paul was educated in a small local school and for a brief time attended the Bingham School at Mebane. At age fourteen he began a seven-year apprenticeship under his uncle, Charles Garrett, as an "agriculturist" and in the wine business. In 1865 Charles and his brother, Dr. F. M. Garrett, purchased Sidney Weller's commercial winery, Medoc Vineyard, in Halifax County. Here Paul learned the business, doing almost everything that was necessary in its operation. He then became the buyer of grapes around the state and elsewhere as well as a salesman. After the death of Charles Garrett the business passed into other hands, but Paul continued as a commission salesman under a contract. His sales were so great and his commission so large that the new owners wanted to break the contract. When they refused to ship wine to fill his orders, young Garrett established his own winery at Littleton and afterwards near Weldon, operating under the name Garrett & Company.

As a salesman Garrett had ranged as far away as Arkansas and Texas, and he built upon contacts already made. He rapidly developed a national trade, distributing wine made largely from the native scuppernong but blended with grapes from New York and California. Soon after the opening of the twentieth century he had wineries and vineyards at many places in the state including Aberdeen, Plymouth, and Roanoke Island. Anticipating prohibition in North Carolina, he moved a portion of his operation to Virginia and a few years later to New York. He established vineyards and wineries at several places in the Finger Lakes District as well as in southern California. By the time of national prohibition in 1919 Garrett was a billionaire but he had no idea of retiring. Although not all of his ventures were profitable, he undertook several new projects. For a number of years he had marketed both red and white wines under the trade name of "Virginia Dare," and used Confederate battle flags in his trademark. He now distributed a dealcoholized Virginia Dare "wine" to which consumers might add their own alcohol. He also added a cola-type grape flavored drink to his list of products. His most nearly successful undertaking, however, was the production and marketing of a superb grape syrup, under the name Vine-Glo, with which purchasers could make their own wine. The dry forces concluded that this was taking matters a bit too far and the production of Vine-Glo was prohibited. During this period Garrett continued to make and distribute wine for sacramental purposes, one of the few legal uses permitted. An Episcopalian, he generously gave wine for the use of the church. With the repeal of prohibition, he was ready to tap the market and soon the Virginia Dare brand was available in every wet state. He pioneered the singing commercial for wines: "Say it again . . . Virginia Dare."

Garrett did much to publicize the use of wine and its history. He spoke and wrote on the subject and contributed an especially significant article to the New York Times of 8 Dec. 1935. Often referred to as "dean of American wine-makers," he was widely known around the country.

As a young man in North Carolina, Garrett married Sadie Walton Harrison, a neighbor, but she died soon afterwards of influenza. About this time he moved to Weldon and there he married Evelyn Edwards. Three of their four sons died very young and the fourth, Charles, died at the age of sixteen. Three daughters, Evelyn Garrett, Mrs. Howard Paulson, and Mrs. Douglas B. Weed, survived him. He was buried at the Episcopal chapel at Bluff Point, N.Y., overlooking Keuka Lake, which he built as a memorial to his son, Charles.

"Instead of letting prohibition ruin his business of making wine, Paul Garrett dealcoholizes the wine and uses the alcohol for flavoring extract, thus holding his old trade and adding a new and important branch to his business." Photograph. Printer's Ink Monthly 2, no. 3 (February 1921). 37. http://books.google.com/books?id=y1U2AQAAMAAJ&pg=RA2-PA37#v=onepage&q&f=false

I have a bottle of Paul

I have a bottle of Paul Garrett champagne my mom & dad acquired on their honeymoon too be opened on their 50th which would have been in the 70's. Any interest or value?

Hi there, great article. Just one correction: Charles (longest surviving son) died at twenty six, not sixteen! He resigned from his position as treasurer of the family business when he contracted TB.