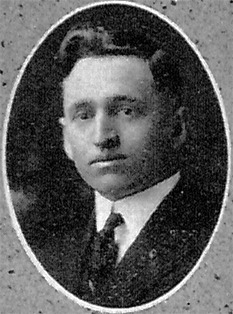 Elmer Henry Garinger, educator, school administrator, and state legislator, was born in Mount Vernon, Mo., the oldest of four children of John A. and Julia Catherine Moore Garinger. His father was a farmer whose grandfather had moved to Missouri from Greensboro, N.C., in 1845. Upon his graduation from the University of Missouri in 1916, Elmer Garinger planned a business career. But, refusing a fellowship in economics at Cornell University, he became instead a teacher and high school principal in Mount Vernon. During World War I he was a sergeant in the Tenth Division Medical Corps, U.S. Army. In 1921 he earned the M.A. degree at Teachers College, Columbia University. That fall he went to Charlotte, N.C., to be principal of Alexander Graham High School and to help set up a new senior high school as well as the first junior high school in North Carolina, Alexander Graham. He then became principal of the new Central High School when it opened in 1923.

Garinger quickly built a reputation as a leader and innovator. The results of a statewide testing program he developed in the early 1920s helped persuade the North Carolina legislature to add the twelfth grade to the state curriculum. In his dissertation, The Administration of Discipline in the High School, published by Columbia University in 1936, the year he received the Ph.D. degree, Garinger concluded that the best way to prevent misbehavior was to keep students busy. Accordingly, he developed a varied curriculum and activities, encouraged team teaching, and established a guidance program. He also was instrumental in getting libraries in the schools.

In 1945 Garinger became associate superintendent of the Charlotte schools and in 1949, superintendent. When the Charlotte and Mecklenburg County schools were consolidated in 1960, he was named superintendent of the new system. Under his leadership, many new programs were developed, such as industrial education, language laboratories, advanced placement courses, the teaching of foreign languages in the elementary schools, and the use of social workers. In 1946, Garinger initiated the first pupil accident insurance plan in the United States. It was because of his contacts at Columbia that the Ford Foundation offered the Charlotte schools a grant to introduce television in the classroom. Garinger used the money to bring educational television to schools throughout North Carolina as well as in Charlotte. His interest in innovations in school architecture led him to recommend in 1926 that the Charlotte school board hire his former adviser at Columbia, Dr. N. L. Engelhardt, as a consultant. Engelhardt's firm brought to Charlotte many new ideas in school planning.

In 1945, when existing colleges did not have room for the veterans returning from World War II, the state supervisor of high schools asked Garinger to assist in developing a community college system. Garinger persuaded the Charlotte school board to allow evening classes to be held at Central High School under the supervision of the extension division of The University of North Carolina. The resulting Charlotte College Center became a community junior college in 1949.

Immediately after retiring as superintendent in 1962, Garinger was elected to the North Carolina House of Representatives. He led the Democratic ticket in Mecklenburg County in 1962 and 1964. In the legislature, Garinger worked for larger appropriations for higher education. He was dubbed a "liberal" because he advocated reapportioning the legislature to conform to population changes, opposed the 1963 law banning "known Communists" from speaking on state-owned campuses, and criticized secret hearings held by the Joint Appropriations Subcommittee in 1965. He sought but did not receive the Democratic nomination to the North Carolina Senate in 1966.

One of Garinger's two aims was achieved when Charlotte College became a branch of The University of North Carolina in 1965. A portrait of Garinger hangs in the building named for him on that campus. His second goal, improved retirement benefits for state employees, was achieved with passage of the bill he drew up to reform the state retirement program. In 1976 he was a member of the legislative committee of the North Carolina Retired Governmental Employees Association, Inc. In May 1963 Garinger was appointed to the board of the newly established Governor's School for Gifted High School Students at Winston-Salem. He served as chairman from 1966 to 1973, when he retired from the board.

In addition to his dissertation, Garinger's publications include two chapters in N. William Newson and R. Emerson Langfitt, eds., Administrative Practices in Large High Schools (1940), and several articles and papers. Between 1921 and 1967 he was visiting professor of education at George Peabody College, the universities of North Carolina and Missouri, Clark University, Appalachian State University, and Queens College. In 1957 he was a member of the American Assembly and participated in an institute at Harvard on teaching about communism. Garinger was a director of the National Education Association, of the North Carolina Education Association, and of several other professional associations. The American Association of School Administrators, the Charlotte branches of the Association for Childhood Education, and the Charlotte Rotary Club all gave him distinguished service awards in 1962. He was a fellow of the American Association for the Advancement of Science and a member of Phi Delta Kappa and Omicron Delta Kappa. He received the City of Charlotte Citizenship Award in 1962 for his service as a director of the Charlotte Rehabilitation Hospital and the Charlotte-Mecklenburg Public Library, as secretary of the Mecklenburg Community College System, and as a member of the Juvenile Court Advisory Committee.

In 1963 Garinger was elected a director of the Bank of Charlotte. He became a vice-president in 1969 and worked for a year on ways to develop new business. His wife, the former Katherine Thomas, who had also taught in Mount Vernon, died in 1968. The couple had no children. He died in Charlotte where funeral services were held at Myers Park United Methodist Church.