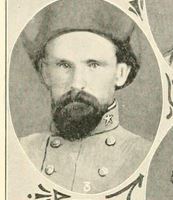 John Marion Gallaway, Confederate officer and tobacco planter, was the son of Thomas Spraggins and Lucinda Chalmers Gallaway of Rockingham County. Before the American Revolution the Gallaway family settled in the Dan River Valley and became one of the great planter families of the region, owning thousands of acres of land in both Virginia and North Carolina. John M. Gallaway received his early education from a local academy; he then entered The University of North Carolina and was graduated in 1854 with second honors. After teaching school in Wentworth and Lexington for several years, he received the A.M. degree from the university in 1858. By 1860 he had decided upon a career in business and agriculture, taking first a position in a commission firm in Richmond, Va. The next year he was in the Yazoo River Valley, Miss., seeking a plantation site.

When the Civil War began, Gallaway returned to his home state and on 7 Oct. 1861 enlisted as a private in a company commanded by Captain Peter G. Evans in the Third North Carolina Cavalry (Forty-first North Carolina Regiment). Immediately after his discharge on 10 May 1862, he began raising a company of partisan rangers in Rockingham County. Gallaway was appointed captain on 1 Aug. 1862. His company, the "Rockingham Rangers," was mustered in at Kinston as a unit of the Fifth North Carolina Cavalry (Sixty-third North Carolina Regiment), commanded by Colonel Peter Evans. By November the company joined the regiment at Garysburg and participated in the capture of Plymouth, where Gallaway was severely wounded in a cavalry charge that broke the ranks of the Union defenders. After recovering from his injury, he returned to the regiment, which was ordered to join the Army of Northern Virginia in May 1863. Through the summer the regiment was engaged constantly in scouting, raids, and skirmishes. The regiment wintered in North Carolina, and by April 1864 it had returned to service in Virginia. In two skirmishes in the spring of 1864, at Ground Squirrel Church and Blacks and Whites, Gallaway had a key role in leading charges and in reconnaissance. He was seriously wounded again on 21 August but returned to duty by October and was promoted to major. During the Battle of Five Forks, the regiment's last major action in March 1865, Gallaway had another wound treated at Petersburg. He became the ranking officer of the regiment in the first week of April, but the war ended too soon for his command to be confirmed.

After the war Gallaway went to Gallaway, Fayette County, Tenn., to manage a family-owned, 3,000-acre tract of timber. There he opened a sawmill and soon had a prosperous crosstie and lumber business. In January 1873 he married Mary Haviland Lawson (1841–1917) of Leaksville, N.C., and they had four children. All of the children died young except a son, John Marion, Jr., born on 3 Mar. 1880. Gallaway was elected to the lower house of the Tennessee legislature in 1875.

Upon the death of his father in 1879, he returned to Rockingham County to settle the estate and manage his inheritance. The Gallaways lived at the family seat, Mon-Vue, near Leaksville until 1882, when they moved to Madison. With the same energy and ability that he had exhibited in the lumber business, Gallaway became a tobacco planter and eventually had some 15,000 acres under cultivation by three hundred tenant farmers. By the turn of the century he was known as the "biggest grower of flu-cured tobacco in the world." In 1885, he was elected to one term in the North Carolina General Assembly as a representative. Although he quickly earned the sobriquet "watchdog of the treasury," he firmly supported a crucial appropriation for The University of North Carolina. In the same year he was named a trustee of the university and continued on the board until 1893.

Active in local politics, Gallaway served as a county commissioner from 1885 to 1898, as chairman of the county commissioners from 1885 to 1889 and as mayor of Madison for sixteen years. In 1899, he was a founder and became the first president of the Bank of Madison. He died in Madison and was buried at the family cemetery on the Mon-Vue plantation.