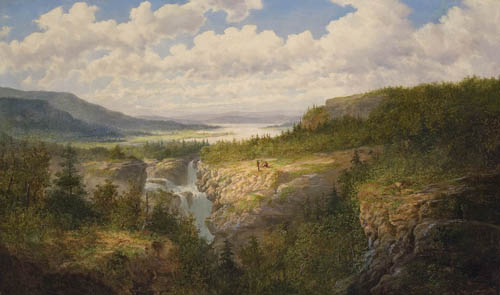 William Charles Anthony Frerichs, painter of landscapes, portraits, and genre works and professor of art and languages, was born in Ghent, Netherlands, the son of Willem Daniel and Helen Eugenia Crommelinck Frerichs. At a very early age he studied art in The Hague; he later studied medicine at the University of Leyden and then returned to the study of art at Brussels Academy where he completed his formal education with a "Grand Tour." During his formative years in The Hague, Frerichs worked under two important masters, Andreas Schelfhout (1787–1870) and Bartholomeus J. van Hove (1790–1880), forerunners of the late nineteenth century flowering of Dutch art known as "The Hague School." The beauty of billowing clouds broad-shadowed on the flat Dutch landscape, the lingering, lucid northern light, the shifting dune valleys near Scheveningen Beach, the complicated play of light on water—all these visual images were part of Frerichs's artistic heritage. The Hague at mid-century was the "Paris of Holland."

Frerichs's father pursued a double career of army officer and newspaper editor. This implies a home atmosphere of adventure and change, which must have contributed to young William's decision to make his way to America. With a passport dated 4 July 1850, he sailed to New York and remained there until 1854, when he set his sights on North Carolina. That year he accepted a position as professor of arts and languages at Greensboro Female College (now Greensboro College).

Frerichs painted twenty-four paintings of a single stream with each painting showing a different waterfall on that stream. The excitement of cascading water and the beauty of the haze lingering over a Blue Ridge terrain were incorporated into a visual index already rich with the memories of ocean spray and the rhythmic crest and fall of waves in the Atlantic. On the Piedmont Plateau, an ancient, isolated range, the Sauratown Mountains thrust skyward within forty miles of Greensboro, providing gorgeous views of the Blue Ridge range spreading southward from Virginia to South Carolina. These mountains were documented many times by Frerichs's paintings; life around the popular spa, Piedmont Springs, was also depicted in his works. Frerichs was the first artist of consequence to travel to the Cherokee country. Here he painted the vast western country of North Carolina for the first time. Some of his scenes remain the only documentary record of certain landmarks such as "The Falls of the Tamahaka," which is now flooded by Fontana Lake.

As Frerichs worked his way into seemingly inaccessible territory, unexpected problems arose. Indians stole his studies from nature, his painting materials, even his easel. He had a great deal of difficulty recovering them. His problems increased in 1863, when his entire collection was destroyed by a fire that consumed Greensboro College. Discouraged by the Civil War and the loss of his studio, he decided to take up farming and moved east to Williston on the Scuppernong River. The trip was over 400 miles, for it was necessary to skirt around Federal and Confederate troops that were blocking the regular route. After a short time, Frerichs and his family abandoned their property on the coast and went to New York. For most of the remainder of his life, he worked in Tottenville, Staten Island, N.Y. Although he made several painting trips to New England, he always painted in the style he developed in North Carolina.

On 1 Jan. 1854 Frerichs married Mrs. Clara Butler of New York City. Her father, Peregrine Branwaite, came from England in 1842. Clara was a friend of Charles F. Deems, the Methodist minister who was president of Greensboro College. Deems returned to New York about the same time as Frerichs and with the help of a group of fifteen persons, including Commodore Cornelius Vanderbilt, founded the "Church of the Strangers," the first nondenominational church in the United States. Frerichs had three children, William D., Lena, and Charles. Clara Frerichs died on 18 Sept. 1874 at age fifty and was buried in the churchyard of Bethel Methodist Church, Tottenville, Staten Island. Frerichs was married again in 1880 to Miss E. Whalen of New York City and they had two sons, Eugene and Alexander. Frerichs died at the age of seventy-six. Funeral services were conducted from the South Baptist Church and burial was in the cemetery of Bethel Methodist Church, Tottenville.

Frerichs's works can be found in private and public collections throughout the country, including the North Carolina Museum of Art and the Museum of Santa Barbara, Calif., as well as in Salem, Ore.; Baltimore, Md.; Newark, N.J.; New Jersey State; and Staten Island, N.Y. The first retrospective exhibition of the work of William C. A. Frerichs was held at the North Carolina Museum of Art, 15 Sept.–20 Oct. 1974.