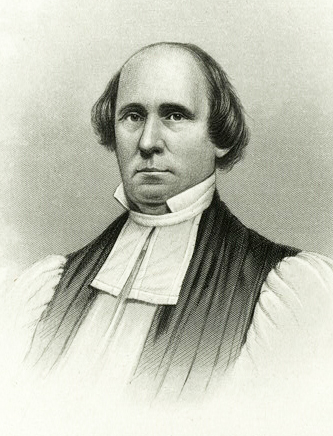 George Washington Freeman, clergyman, was born in Sandwich, Mass., to the Reverend Nathaniel Freeman (1741–1843), a Congregationalist minister, and his first wife, Tryphosa Colton, of Killingly, Conn. George was their twelfth and youngest child, although Nathaniel had eight more children by a second wife. His early manhood was spent in secular occupations, but he later came to North Carolina to pursue his calling as a teacher and to study for the ministry of the Protestant Episcopal church.

In 1820, before taking on full-time church responsibilities, Freeman became principal of the Warrenton Male Academy, where he stayed until 1823. During that time, he was a delegate to the 1822 diocesan convention at Emmanuel Episcopal Church in Warrenton. When he resigned as principal of the academy, he went to Raleigh where he conducted a school that had just opened.

In Raleigh Freeman often served as lay reader in Christ Episcopal Church (established 1821) in the absence of Bishop John Stark Ravenscroft. He was ordained deacon in that church on 8 Oct. 1826 and priest in Christ Church, New Bern, on 20 May 1827 by Bishop Ravenscroft. For two years he served as a missionary in the diocese of North Carolina. On 31 Aug. 1829, he was elected rector of Christ Church, Raleigh, a position he held until 1840. While he was rector, the church acquired a new organ in 1833, much to the horror of some of his old-fashioned parishioners. The next year, two new side galleries were erected, increasing the church's seating capacity.

Freeman was deeply interested in the spiritual welfare of both slaves and masters. He did not favor emancipation because he had observed the condition of freed blacks and decided that their lot was worse. His message was one of mutual consideration and forbearance for both slaves and masters. On 27 Nov. 1836 he delivered two discourses on the rights and duties of slaveholders. The first discourse traced the biblical basis for slavery. In the second message, he instructed slaveholders on how to treat their slaves based on the passages in the New Testament dealing with slaves and masters. Because masters are the guardians of their slaves, he said, they should bring up their slaves as Christians, instruct them in Christian doctrines, and set good Christian examples for them to follow. The North Carolina General Assembly was meeting at the time of the discourses, and four members—large slaveholders themselves—succeeded in getting the two sermons published.

On the issue of "worldly pleasures," Freeman's Puritan views, still ingrained from his New England days, clashed with those of his congregation, a conflict that eventually led to his resignation. He discouraged dancing, whist games, the theater, circuses, and parties. He also preached against the fashions of the day, including satin, lace, ribbons, and feathers. Apparently his congregation had begun to see no harm in these activities, much to the displeasure and disappointment of its rector.

On 18 June 1840, Freeman wrote a letter of resignation to the vestry and included a separate letter of explanation. When he had first come as pastor, he wrote, church members would not even consider taking part in such amusements. "Since that period, however," he said, "a change has come over the congregation, a new spirit has arisen, and the Pastor and his flock are no longer of one mind." According to one member of the vestry, the congregation did not want Freeman to leave; although it disagreed with certain of his views, it valued him as a preacher. The vestry reluctantly accepted his resignation.

After delivering a "valedictory sermon," a loving and encouraging farewell at Christ Church, Freeman went to Columbia, Tenn., and a year later to Swedesborough, N.J. He then accepted a call to become rector of Immanuel Church in Newcastle, Del. Soon afterward, he was elected missionary bishop of Arkansas and the Indian Territory. He received the degree of D.D. from The University of North Carolina in 1839. On 26 Oct. 1844, he was consecrated in St. Peter's Church in Philadelphia. He died in Little Rock, Ark.

Freeman's wife was Anne Yates Gholson (d. 1855), daughter of Colonel William Yates of Virginia and widow of William Gholson. They were the parents of three sons: George Russell (b. 1819 in Raleigh), Andrew Field (b. 1822 in Warrenton), and Charles Edward (b. 1826 in New Bern).

George W. Freeman, Letter of Resignation from Christ Church, (1840), Two Discourses: The Rights and Duties of Slaveholders (1836), and A Valedictory Sermon delivered in Christ Church (1841).