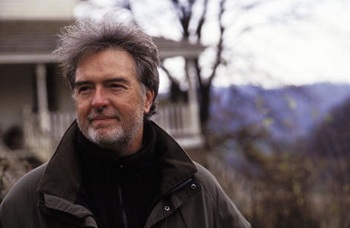 Frazier's childhood was spent in the small western North Carolina towns of Andrews and Franklin, but it was the mountain near his grandparents, Cold Mountain in Pisgah National Forest, that gave him the title of his first novel.

He received his bachelor's degree from the University of North Carolina at Chapel Hill in 1973 and his M.A. in English at Appalachian State University in Boone, N.C. in 1975. Frazier met his wife Katherine at ASU, and married her in 1976. Frazier's first work was a textbook, Developing Communication Skills for the Accounting Profession, co-written with Robert Ingram and published in 1980. Before completing his doctorate in American literature at the University of South Carolina in 1986, he traveled and co-wrote a Sierra Club travel guide, Adventuring in the Andes, published in 1985, the same year his daughter Annie was born.

Frazier taught briefly at the University of Colorado at Boulder before moving back to North Carolina where he and his wife both taught at North Carolina State University. His wife convinced him to quit his job teaching English at NCSU and work full-time on his novel. His friend and fellow North Carolina novelist, Kaye Gibbons, showed his unfinished novel to her literary agency which resulted in the publication of Cold Mountain in 1997.

The plot is based on a family story about his great-great uncle, Confederate soldier William P. Inman, and his journey home during the Civil War. Cold Mountain sold millions of copies, spent weeks on the New York Times best sellers list, and won the 1997 National Book Award for fiction. In 2003, a successful film adaptation of the book was released, which garnered seven Academy Award nominations, and an Oscar for Renée Zellweger, who won the award for Best Actress in a Supporting Role.

In 2002, the publishing company Random House paid Frazier an eight million dollar advance for the rights to his second novel. Thirteen Moons, a historical epic about the North Carolina Cherokee, was published in 2006. Frazier partnered with the Museum of the Cherokee Indian to launch the Yonaguska Literature Initiative to preserve the Cherokee language and create a Cherokee-language translation of Thirteen Moons, and other contemporary works.

In 2008, he received the North Carolina Award for literature.

Frazier's third novel, Nightwoods, set in 1960s North Carolina, was published in 2011. Its heroine is Luce, a woman suddenly responsible for her murdered sister's children while a caretaker for an aging Appalachian lodge.

Frazier currently resides on a farm near Raleigh where he continues to write and raise show horses.

Mr. Frazier: I just finished 13 Moons for the second time. First time I read it was about 15 years ago. I grew up in E .Tn. and roamed around W. N.C. some in my youth 55 years ago. 13 Moons is a wonderful story sprinkled with tidbits of wisdom that are electric. I did remember a lot of the story the second time, but appreciated some of the nuance I missed during the first reading. I sent my bro in Chattanooga a copy of Varina and 13 Moons. We continue not to treat the Indians well which is tragic. When I was young I would ride around W.NC an N. GA. with my Dad, a history professor, and he would point out old plantation houses owned by the white Indians. I really had little understanding then. Now I have a little more. -Jim in Va.

I really need my family story

Mr. Frazier: Just finished Varina and can only say WOW. I am not a scholar, but have read many books including all of yours. I felt like I knew Varina and had an interesting view of the period in which she lived after reading Varina. I intend to read Varina again soon. Thank You for such a gift. -jim in Va.

You may not remember me but I

You may not remember me but I used to babysit you when you were small. I attended both Andrews Junior and Senior High School when your father was the principal. My niece, Vicki Breedlove was your classmate in high school. She had you autograph your second book, Thirteen Moons. I’m very pleased that you have been very successful author. I also have your first book as well but not autographed. I now live in Houston, Texas. I wish you well and pleased that you are so successful.

Just finished "Cold Mountain". Wanted to let Mr. Frazier know how much I enjoyed it. Would love to meet him sometime. Thanks.

I am ready cold mountain for

I am ready cold mountain for my senior novel project, and i love it!

these novel is unique,

these novel is unique, reading it and watching the movie is extraordinary...i require readers and followers to read the cold mountain coz the language, and technique to sum up the whole novel is excellent and way beyond our imagination anm emotion.