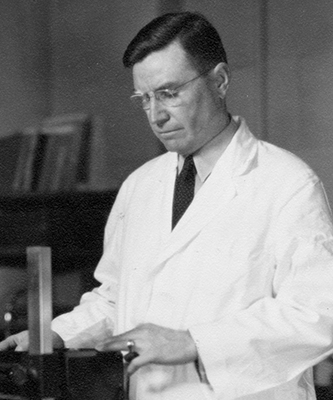 Wiley Davis Forbus, pathologist and medical educator, was born in Zeiglerville, Miss., the son of William Peyton and George Ellen Davis Forbus. After completing his secondary education in 1912 in local schools of Laurel, Miss., he entered Washington and Lee University, Lexington, Va., from which he was graduated with honors in 1916. During his senior year he was assistant in chemistry. Subsequently he taught general sciences at St. Albans, National Cathedral School for Boys, Washington, D.C., and in 1918 was an artillery observer in the U.S. Army Air Service. Following his first year of military service he taught at Friends' School, also in Washington.

In 1919 Forbus enrolled in the School of Medicine of the Johns Hopkins University, Baltimore, Md., and was graduated in 1923 with the M.D. degree. The same year he accepted a commission as first lieutenant in the U.S. Air Service Reserve, an appointment he held for ten years. Upon graduation he was invited to remain at Johns Hopkins, where for seven years he served successively as assistant instructor and associate in pathology and as assistant resident and associate pathologist. In 1928 he was guest assistant at the Pathologisches Institut de Ludwig Maximilians Universität, Munich, Germany.

In 1930, when Duke University established a medical school, Forbus joined several of his colleagues from Johns Hopkins in forming the faculty and program of the new institution. Afterward he became professor and chairman of the department of pathology and chief pathologist to the Duke Hospital, the teaching adjunct of the Duke University School of Medicine. There he spent the rest of his career and became recognized as one of the world's great men of science and an international leader in pathology. In 1953 and 1954 he was acting dean of the medical school. When he officially retired in 1961, he was given life tenure as professor and chairman emeritus of the department of pathology.

Forbus was always in demand as a lecturer and a consultant for both military and civilian medical services and education. In that capacity he served many hospitals throughout the nation, including the Walter Reed Army Hospital in Washington, D.C. On military assignment, he was a consultant to the secretary of war on infectious diseases (1941–46), to the Armed Forces Institute of Pathology (1941), and to the Division of Biology and Medicine (medicolegal) of the Atomic Energy Commission (1952). For the Veterans Administration, he was branch section chief in pathology (1948) as well as a consultant.

Several major appointments sent him to other nations as a consultant. He was a member of the Foreign Operations Administration Mission to China (1953), external examiner in pathology at the British Colonial University Medical School in Hong Kong (1953), consultant to the surgeon general of the U.S. Army for the Far East Command (1953) and in Europe (1958), a visiting consultant to the Atomic Bomb Casualty Commission in Japan (1953, 1956), adviser on medical education at Keio University, Tokyo, under the auspices of the Rockefeller Foundation (1956), and visiting consultant on medical education in the Far East (1956) under the auspices of the China Medical Board. He was chief of party, University of California–Airlangga University (Indonesia) Affiliation in Medical Education (1961–62).

Earlier he had served as chairman of the joint committee of the North Carolina Medical Society and the North Carolina Pathological Society on medicolegal affairs, and was author of the first North Carolina medical examiner law enacted in 1955. A proponent of forensic medicine, Forbus led a long campaign in North Carolina to upgrade the coroner system. Through his efforts legislation was passed establishing the state's medical examiner program. He was also medicolegal educator and consultant to the Duke University School of Medicine. Its library has the "Forbus Collection—Pathology in Lantern Slides," which includes indexes and catalogues he collected through the years and collated in 1964 and 1973.

A tireless student and a prolific writer in his field, Forbus contributed more than sixty scholarly articles and reviews to professional journals and collections of essays. One of his most noted works was "Reaction to Injury, Pathology for Students of Disease," a 797-page study published in 1943. He prepared over twenty series of scholarly lectures—some published, others in typescript—located in half a dozen libraries including those at Duke University and The University of North Carolina at Chapel Hill. Many of the lecture series he delivered in other countries were published in those countries. He served on the editorial board of the North Carolina Medical Society's Medicine in North Carolina, Essays in the History of North Carolina Medicine, to which he also contributed, and was associate editor of the national Archives of Pathology (1945–61).

During his undergraduate years at Washington and Lee University he was elected to Phi Beta Kappa (scholastic), Sigma Xi (scientific), and Phi Gamma Delta (social) fraternities. In 1956 the same university awarded him the honorary degree of doctor of science. He was also tapped for membership in Alpha Omega Alpha, the honorary medical fraternity. From the American Association of Pathologists and Bacteriologists he received the prestigious Gold Headed Cane, "the highest recognition from his peers." Duke University established the Wiley D. Forbus Educational Center for Pathology and, at the time of his death, created the Wiley D. Forbus Memorial Fund at the Duke Medical Center.

Forbus died in the Duke Hospital from a terminal illness diagnosed in 1971, although he had been active until a month before his death. His ashes were deposited behind a bronze plaque in the Memorial Wall in the foyer of the Duke University School of Medicine.