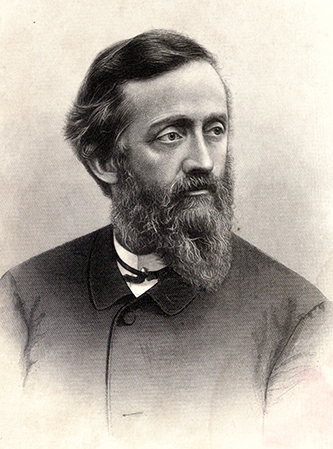 Oscar Penn Fitzgerald, Methodist clergyman, editor, educator, and author, was born in Caswell County near Ruffin, the son of Richard and Martha Jones Hooper Fitzgerald. He attended local schools until he was thirteen and then went to Lynchburg, Va., to work for the Lynchburg Republican for six years. When his father enlisted for the Mexican War, Oscar returned home and taught in a country school in Rockingham County to help support his mother. After his father's return he worked in newspaper offices in Richmond, Va., Columbia, S.C., and Macon, Ga.

In 1853, Fitzgerald entered the ministry of the Methodist Episcopal Church, South, by way of the Georgia Conference and was stationed at Andrews Chapel in Savannah. In 1854, he married Sarah Banks of Georgia and soon afterward they left for California on a missionary assignment. There he became editor of the Pacific Methodist Advocate and the Christian Spectator. From 1867 to 1871 he served as state superintendent of education in California; in this position, to which he was elected by popular vote, he was instrumental in the establishment of an institution that has since become the University of California at Berkeley. During this period he offered himself for the Democratic nomination for the U.S. Senate.

In 1878, he went to Nashville, Tenn., headquarters of the Methodist Publishing House, to become editor of the Nashville Christian Advocate, the official organ of the southern church. With 25,000 subscribers it had the widest circulation of any newspaper. After twelve years in the post, he and Atticus Greene Haygood (1839–96) were elected bishops of the Methodist Episcopal Church, South. Fitzgerald served from Maryland to California.

He was the author of twenty books. His excellent command of the English language and keen sense of humor, much of it aimed at himself, make his California Sketches —first published in 1878 and reprinted many times—lively reading. He produced book-length biographies of Dr. Thomas O. Summers, John B. McFerrin, Judge Augustus B. Longstreet, and others. In politics he demonstrated a "stanch and outspoken allegiance to the Confederacy." His final years were spent on the campus of Vanderbilt University, and he died at Monteagle, Tenn. Because of his "wit, geniality, and sweet Christian spirit," Fitzgerald came to be known as the "St. John of Methodism." For many years one of his sons was a professor at Duke University.