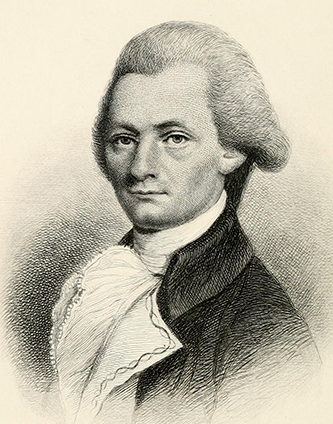 William Few, Jr., member of the Continental Congress and of the constitutional convention, U.S. senator, and judge, was born near Baltimore, Md., the son of William Few, Sr., and Mary Wheeler Few. In 1758, the family moved to North Carolina where the elder Few purchased a 640-acre farm on the banks of the Eno River near Hillsborough; he also operated a gristmill and tavern in cooperation with his brother, James. Young William studied briefly with itinerant schoolmasters and had some schooling in law, but educated himself largely through reading on his own. In 1767 his father bought another farm about seven miles from Hillsborough, and William at age nineteen took over its management.

As the Regulator disturbances developed in Orange County during 1768–71, William Few, Sr., sympathized with the movement and became involved at least to the extent of giving bond for two of the leaders, William Butler and Herman Husband, to assure their appearance for trial. It was probably because of this, and because of the Regulator activities of his son James, that the Few farm was destroyed by Governor William Tryon's forces after the Battle of Alamance on 16 May 1771. The following winter, the Few family moved to Georgia, settling in St. Paul's Parish near Wrightsboro. William Few, Jr., remained behind in North Carolina to take care of the family's properties but moved to Georgia sometime between 1773 and the summer of 1776.

Once in Georgia, Few advanced rapidly in the political hierarchy and took a prominent role in the colony's move toward independence. In 1776 he was a member of the convention to form a constitution for Georgia as well as a member of the first assembly, which elected him to the state council in 1777. Subsequently he served as surveyor general, commissioner of confiscated estates, and senior justice of Richmond County, returning to the assembly in 1779 and 1780. In 1780 he was elected to the Continental Congress, where he served several terms, and in 1787 he represented Georgia in the constitutional convention in Philadelphia. From 1789 to 1793 he was a U.S. senator from Georgia, and after that served as federal judge of the state's Second Judicial District.

In addition to his political activities during the American Revolution, Few served as an officer in the Georgia militia. With his brother, Benjamin, he led Georgia troops in skirmishes with the Tories in South Carolina and Georgia in 1779–80. He acquired a plantation in Columbia County, Ga., as well as other tracts of land in Jackson County. One of the latter he later sold to the state of Georgia for the use of the proposed state university. He was also one of the first trustees of the University of Georgia.

In 1799, due to ill health, and also possibly due to disillusionment with the institution of slavery, Few moved to New York City, the home of his wife Catherine Nicholson, whom he had married while a member of the U.S. Senate. They became the parents of three daughters. In New York, Few carved out a new career for himself as a member of the state legislature, alderman in New York City, commissioner of loans for the state, and inspector of state prisons. In private life he was a bank director and president, as well as a "gentleman farmer." He died at the home of his son-in-law, Albert Chrystie, in Fishkill, N.Y.

E. M. Coulter, The Toombs Oak and Other Chapters of Georgia History (1966).

William Few, "Autobiography of Col. William Few of Georgia, from the Original Manuscript in the Possession of William Few Chrystie," Magazine of American History 7 (1881).

Charles C. Jones, Jr., Biographical Sketches of the Delegates from Georgia to the Continental Congress (1891).