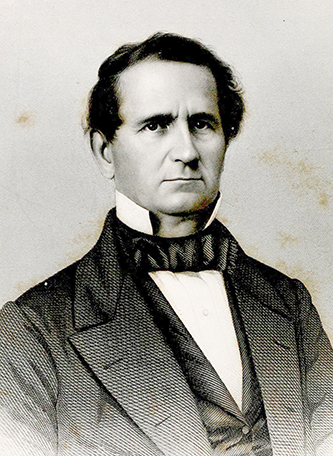 Manuel Fetter, teacher, was born in Lancaster, Pa., the son of Frederick Fetter, a cabinetmaker of German descent, and his wife, Anna Yarrell Fetter. Baptized Emmanuel Yarrell Fetter in the Old Moravian Church in Lancaster on 12 Aug. 1809, in adulthood he abbreviated his name to Manuel. While the Reverend William Augustus Muhlenburg, the Episcopal clergyman and educator, was rector of St. James Church, Lancaster (1820–26), he noted young Fetter's ability and took charge of his education. On leaving Lancaster, the Reverend Mr. Muhlenburg went to Long Island, N.Y., where he founded St. Paul's College and the Flushing Institute. (The latter was used as a model for the short-lived Episcopal School for Boys in Raleigh.) Fetter attended the Flushing Institute, where he was well trained in the classics, Hebrew, French, and German. He then studied at Columbia College (now Columbia University) and received the A.B. and A.M. degrees before returning to Flushing Institute for a short time as professor of ancient languages. In December 1837 he was elected to the chair of ancient languages at The University of North Carolina, succeeding the Reverend Dr. William Hooper. In the autumn of 1838, when the department was divided, Fetter became professor of Greek language and literature. He remained in that position until the university was reorganized in 1868.

Fetter was one of the original members of the Church of the Atonement (later the Chapel of the Cross) when the parish was organized in the village of Chapel Hill in 1842. In 1868 he was riding in a carriage with David Swain, then president of the university, when an accident occurred from which Swain eventually died. When in Chapel Hill, Professor Fetter lived in what came to be known as the Hooper-Kyser house on Franklin Street.

After leaving the university in 1868, Fetter taught at various classical schools in the state, particularly in Henderson and Goldsboro. However, he had been a university professor too long to be effective and found the work uncongenial. He died in Jackson, N.C., at the home of his son Charles, who was then teaching school there, and was buried beside his wife in the village cemetery in Chapel Hill.

Kemp P. Battle, who knew Fetter well, described him as an accurate scholar and a Christian gentleman. Nevertheless, he felt the professor overemphasized grammar and gave his students little idea of the beauty of Greek literature. A former student, Peter Mitchel Wilson, said there was no preposition hidden from him and he could repeat from memory, in the original Greek, St. Paul's sermon on Mars Hill. Fetter, who had unusually large feet, was sensitive to ridicule, and when he first came to Chapel Hill he had difficulty adjusting to southern ways. Eventually, however, he gained the respect and admiration of his students who referred to him as "Old Fet." A tintype of Fetter—that of a handsome man in the prime of his life—appears in published sources.

While in New York, Fetter married Sarah Cox (1816–1 Mar. 1867), who was described by a Chapel Hill contemporary as a lady of great vivacity and kindness of heart. They were the parents of four sons, Frederick Augustus, Charles, Henry, and William Muhlenburg, and three daughters, Susan, Catherine, and Martha. All four sons were graduated from The University of North Carolina and served in the Confederate Army. Frederick and Charles both became teachers and late in life were ordained to the priesthood of the Episcopal church on the same day in 1895 by the Right Reverend Joseph B. Cheshire.