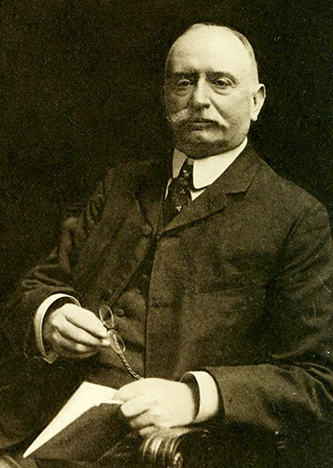 Aaron Marshall Elliott, philologist, was the son of Aaron Elliott and Rhoda Mendenhall Elliott. He was born near Elizabeth City, Pasquotank County, and lived there until 1847, when his family moved to Deep River Community in Guilford County. Elliott's early education was no better than that of the average country boy, as he worked on his father's farm and attended various rural schools for a few months. However, in 1860, when he went to live with his uncle, Dr. Nereus Mendenhall, in Florence, N.C., he began studying with the definite view of later entering Haverford College in Pennsylvania. In February 1861, Mendenhall obtained a teaching position at New Garden Boarding School (which later became Guilford College). Elliott also went to New Garden and studied for the remainder of that school year as well as the following year.

At the outbreak of the Civil War, Elliott failed to secure exemption from the army. Opposed to the bearing of arms, he went north to attend Haverford College. He entered the college in 1862 as a sophomore but had to repeat the year because he could not keep up with his class. After graduating in 1866, he returned to North Carolina and taught at New Garden Boarding School for one year. He then entered Harvard on 13 Sept. 1867 as a senior and was graduated third in his class on 15 July 1868.

Elliott spent the next eight years in Europe, first as a tutor and then as a student. In Paris he tutored the sons of a Mr. Parker of Boston until the outbreak of the Franco-Prussian war, when his charges returned to the United States. Elliott remained in Paris but escaped to Italy after the Germans invaded the city. In Italy, he came under the influence of Professor Angelo De Gubernatis, a Sanskrit scholar of some note. At this point, Elliott turned his attention to Oriental languages, making them his chief concern for the following six years. He studied at various universities in Europe: the Collège de France and the Ecole des Hautes Etudes from 1868 to 1871, the Instituto degli Studii Superiori in Florence from 1871 to 1872, and the University of Madrid in 1873. Later in 1873, after escaping from Spain during the Carlist Revolution, he entered the University of Munich and spent time at the universities of Tübingen and Vienna. While in Germany he decided to become a professor of comparative philology. He returned to America in 1876.

Elliott proved to be a scholar around which a language department could be built at Johns Hopkins University. He joined the faculty on 5 June 1876 as an assistant professor of Romance languages. Although he first intended to devote himself to the Eastern tongues at Hopkins, he quickly shifted his concentration to the Romance field and to organizing the department of Romance languages, which was in a discouraging state. At the beginning of his professional career Elliott also did much pioneer work in organizing the scientific study of modern languages and literature. In 1883 he was instrumental in establishing the Modern Language Association and for nine years was its secretary. He edited the association's publications for twenty-five years, even after becoming its president in 1894. In 1886 he founded the Modern Language Notes, the first technical journal in this field. Because Johns Hopkins would not finance the journal, Elliott printed it in a shed on his property for seventeen years. The Johns Hopkins Press took over its management in 1903, when it became too large for private hands. It became the property of the university at Elliott's death.

The authorities at Johns Hopkins were slow to recognize Elliott's contributions. In 1880 B. L. Gildersleeve declared his junior colleague to be "as much a riddle to me now as he was four years ago." By 1884, however, the uncertainty about him had largely dissipated and he was promoted, first to associate professor and, in 1892, to professor. After his first promotion, Elliott received a letter from the president of Johns Hopkins asking for better things from his department. That year Elliott created the Romance Seminary, which became a seedbed of Romance scholars for American universities. He seemed to know instantly of impending vacancies in his field and was always ready with a candidate from his department, whether a beginner or an experienced teacher. If the latter was required, Elliott recommended one of his older men and moved a graduate of the current year into the job thus vacated.

Elliott was prized both for his talents and for his never-failing cheerfulness. He was a member of a number of clubs and organizations, including the American Philological Association, the National Educational Association, and the North Carolina Society of Baltimore. He received a Ph.D. from Princeton in 1877 and an LL.D. from Wake Forest College in 1891. He was an official delegate to the Paris Exposition in 1900 and was awarded the Cross of the Legion of Honor by the French government in 1907.

Although Elliott's training as a scholar was excellent, it was as a teacher that he rendered his greatest service to education. He never ceased to be actively interested in the welfare of his students, and his altruism was reflected in all of his dealings. Even those who knew him only by correspondence quickly came to feel that his interest in them and their work was personal and lasting. As a token of appreciation, several of his friends published a two-volume memorial shortly after his death entitled Studies in Honor of A. Marshall Elliott.

He was married on 14 June 1905 to Lily Tyson Manly, daughter of James E. Tyson of Ellicott City, Md.

John C. French, A History of the University Founded by Johns Hopkins (1946).