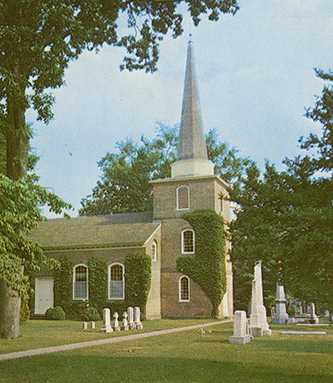 Daniel Earl, Anglican clergyman, school teacher, and missionary of the Society for the Propagation of the Gospel, was born in Bandon, County Cork, Ireland, the youngest son of an Irish nobleman. Commissioned in the British army, Earl resigned in order to take holy orders on 13 Sept. 1746 after marrying the daughter of a church official. He was licensed to serve in North Carolina by the Bishop of London on 19 Sept. 1756, and arrived in the Albemarle region in 1757. There he was curate for the aging Anglican minister, Clement Hall. Upon Hall's death in 1759 he became rector of St. Paul's Parish in Edenton, where he served until his resignation in 1778.

Earl's first wife died before his departure for North Carolina; their two daughters joined him after he settled there. Soon after his arrival he married a widow, Charity Jones, of Smithfield, Va.

Earl built a plantation, Bandon, fifteen miles above Edenton on the Chowan River. A knowledgeable farmer, he showed local residents improved methods of weaving and preparing flax for the loom. He was a pioneer in the shad and herring fishing industry and was accused of devoting too much time to his herring fisheries. About the time of the Revolution, a placard appeared on his church door:

A tumble-down church
And a broken-down steeple
A herring-catching parson
And a damn set of people.

From 1759 to 1783 Earl received partial support from the Society for the Propagation of the Gospel. His annual reports to the society recount the difficulties experienced by a missionary in a large colonial parish. Earl preached at Edenton and at four chapels in Chowan County. To the society he reported his large number of baptisms, described the poor physical condition of the parish church, and pleaded for funds to establish a school. In May 1775 he reported that he had not received a shilling from his parish for nearly three years. Earl regularly complained of poor health, and in 1775 the society granted his request to move to one of the northern colonies. In a letter dated 30 Aug. 1775, he thanked the society for permission to move but said he was too weak to travel at a time when political conditions were so unsettled and when many men were under arms.

In that letter Earl indicated that he had avoided censure by never introducing "any Topic into the Pulpit except exhortations and prayers for peace, good order and a speedy reconciliation with Great Britain." Although he refused to sever his connection with the Church of England, which he believed to be of divine origin, Earl actively supported the Revolution. He presided at a revolutionary meeting in Edenton on 23 Aug. 1774, and was appointed the following year to a committee to raise funds to promote local industry.

In 1778 Earl resigned as rector of St. Paul's, and his former assistant Charles Pettigrew was elected to succeed him. He spent the remainder of his life at his country home, Bandon, where he taught classical school for boys. He was buried at Bandon.