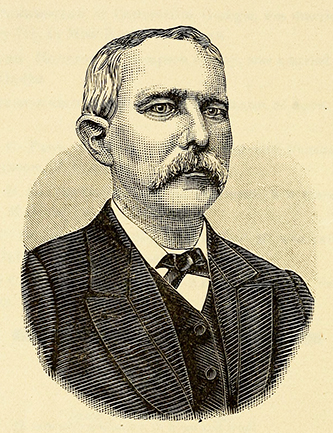 John Edward Dugger, teacher, was born in Brunswick County, Va., the son of Daniel Dugger, proprietor of the hotel in Lawrenceville. At a political dinner at the hotel in 1837, an argument developed between Daniel Dugger and George Coke Dromgoole, who then represented the local district in Congress. This led to a duel between the two men, fought 6 Nov. 1837 at the plantation of Thomas Goode Tucker in western Northampton County, N.C., not far from Brunswick. Dugger was fatally wounded. Writing in 1891, Stephen B. Weeks stated that Dromgoole, overcome with remorse, provided for the widow and educated the two sons, John Edward and Macon Tucker, who were infants when their father was killed. The fact that both sons were graduated from The University of North Carolina, Dromgoole's alma mater, gives credence to this claim.

On finishing at Chapel Hill with an A.B. degree in 1857, John Edward Dugger settled in the town of Warrenton where he became head of the Warrenton Male Academy. During the Civil War, he served as a captain in the Confederate Army. Returning to Warrenton in 1865, Captain Dugger, as he came to be called, reopened the academy and taught there for ten years. In 1876 he was called to head the Centennial School in Raleigh, the first public graded school in that city. Here Dugger excelled in pioneering work but found it difficult to relate to school authorities. In August 1882, he moved to Rocky Mount where he became principal of that town's first graded school, located in the old fair grounds in what is now Braswell Park. After two years he returned to his home in Warrenton and resumed his teaching duties at the Warrenton Academy.

Dugger was a trustee of The University of North Carolina from 1874 to 1883. He was described by a former student as small of stature, but graceful, well formed, and remarkably handsome. As a teacher, he was capable but a strict disciplinarian. In his relations with men, particularly school authorities, he was unnecessarily outspoken.

Dugger and his wife Anne Wilson were the parents of two sons, John and Daniel, and two daughters, Alice and Janet. Alice married Walter Grimes of Raleigh, and Janet became the wife of Edward Simpson of Enfield. Mrs. Dugger died in Warrenton in 1891.

R. D. Trevathan, The Life History of Demsey Trevathan and Descendants with a History of Rocky Mount 70 Years Ago (1940).