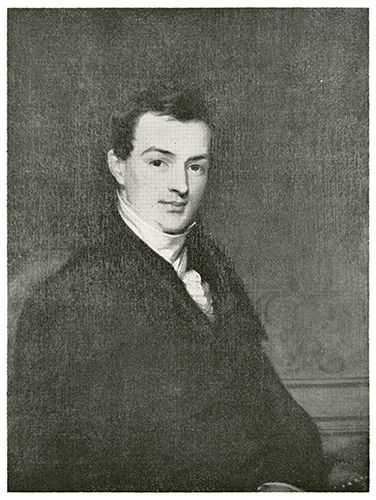 Robert Donaldson, Jr., banker and patron of the arts, was a native of Fayetteville and the son of Robert Donaldson, Sr., a wealthy Scottish merchant and importer who developed the largest mercantile business in the South. Young Donaldson attended The University of North Carolina where he was graduated in 1818. Returning to Fayetteville, he engaged in his first architectural venture, the Lafayette Hotel, built in preparation for the 1825 visit of General Lafayette to the town named after him. In 1828 Donaldson married Susan Gaston, daughter of the jurist William Gaston, and moved with her and with his younger brother, James, and two sisters to New York City. There he became a patron of young artists and writers of the rising Romantic movement.

The Donaldsons' Manhattan residence, an elegant location overlooking the Battery, was remodeled by Robert's friend, New York architect Alexander Jackson Davis—perhaps his first work for Donaldson—and included decoration by sculptor John Frazee. Paintings by inventor-artist Samuel F. B. Morse and C. R. Leslie and furniture by Duncan Phyfe made the home a haven for art lovers, as noted by the art historian William Dunlap.

Influenced by his friends Samuel Morse, who painted landscapes celebrating nature, and poet James Hillhouse, who advocated living in the country, Donaldson—a true Romantic—left New York City in the mid-1830s to live at Blithewood, an estate he purchased on the Hudson. Becoming a creator like his friends, he developed Blithewood into a showplace of new ideas in landscape design, building an English garden with winding roads, waterfalls, and bridges across ravines. Gatehouses, a gardener's cottage, and other structures on the estate were designed by Alexander Davis, who, Donaldson felt, was inspired by Pegasus, the winged horse of the muses. In this classical image Donaldson also saw himself, the patron: "When [Davis] mounts the Pegasus of design he may require the restraining taste of another." Blithewood was featured in a popular book, Landscape Gardening and Rural Architecture (1841 and subsequent editions), by Andrew Jackson Downing, and thus became known to many Americans. Another Downing book, Cottage Residences (1842 and subsequent editions) was dedicated to Donaldson as "arbiter elegantiarum," supreme arbiter in matters of taste. 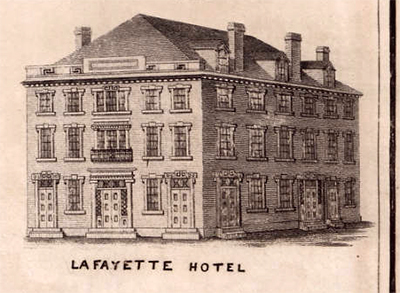 In 1852 Donaldson sold Blithewood and bought a nearby estate, Edgewater, for which Davis designed a chapel, houses, and other buildings. Whereas most of the structures at Blithewood have been destroyed, those at Edgewater remain. The estate has been purchased by a present-day North Carolinian, Richard Jenrette, who is a businessman in New York. Jenrette is collecting Donaldson's paintings, furniture, and books with the intention of turning the main house, a splendid mansion of the early nineteenth century with an addition by Davis, into a museum.

Donaldson always remained attached to his native state. To his Presbyterian church in Fayetteville he gave property for the church-sponsored school he attended as a child and the Donaldson family home as a manse. To the Presbyterians in Chapel Hill, where he went to college, he gave a design by Davis for their church building (1848), now destroyed. And to his alma mater he offered in the 1830s Davis designs for structures, unexecuted. Most importantly, however, he arranged for Davis to visit the campus in 1844 and undertake a program of architecture and landscape design. The trip led to a number of Davis commissions in the state during the following years. Also in 1844 Donaldson advised the university to plan a model farm on the campus and introduce courses in agriculture, a forward-looking idea at the time. At his death he left bequests to the university and to Presbyterian and other religious groups. But his will was contested by his children and declared invalid.