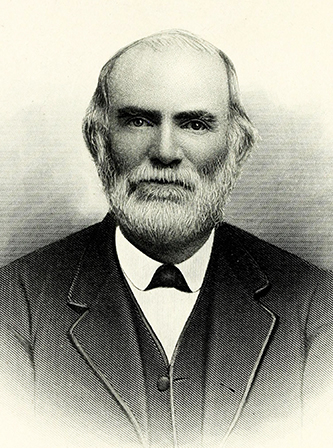 Hugh Woody Dixon, manufacturer and civic leader, was born at Snow Camp, the son of Joseph and Mary Woody Dixon. His father was of the line of Thomas Dixon, an English Quaker, who came to America about 1700 and located in Bucks County, Pa. Fifty years later Thomas's son, Simon, left Pennsylvania and settled in the Cane Creek community of what is now Alamance County, N.C. The Dixons acquired a large tract of land and began various business enterprises in present-day Snow Camp. This marked the beginning of a heavy Quaker migration into the colony that continued for the next quarter of a century. Thomas Dixon, the son of Simon Dixon, died in 1827, and his two sons, Joseph and Jessie, carried on the various enterprises initiated by the family. Joseph Dixon became a famous iron caster whose foundry produced most of the castings for multiple grist and sawmills in that section of North Carolina.

When Hugh Woody Dixon was thirteen years old, he was enrolled in the New Garden Boarding School (later Guilford College) near Greensboro, but apparently did not attend more than a year. He returned to New Garden in 1841, however, and after that spent three years teaching and surveying, supposedly in Alamance County. For the next thirteen years (1844–57) he was a partner in the Unthank and Dixon Foundry, except for the twenty-four months he worked in the construction of the Gulf and Graham plank road.

On 29 Nov. 1855 Dixon married Flora Adaline Murchison of the Cane Creek community. She was not a Quaker, but probably was a Presbyterian. Dixon was challenged for violating a Quaker rule and marrying outside the denomination. His reply to the Quaker committee has often been quoted—that he had no regret for having married Miss Murchison, only that friends felt compelled to frown on the marriage. In 1857 he left Alamance County and settled in Chatham County at Ore Hill. There he was busy operating gristmills, a steam sawmill, and a foundry.

As a community leader with a Quaker background, Dixon was tested sorely during the Civil War. In spite of his antislavery position, which he expressed freely and frequently, he held his job as postmaster at Ore Hill, paid the $500 indemnity exempting Quakers from active military service, and lived through the war in a degree of peace and prosperity. He had accumulated some wealth, and in 1866 decided to return to Snow Camp where he had been a founder of Sylvan Academy, an educational force in the community for several years. In business he was also a respected leader. With his brother, Thomas, he established the Snow Camp Woolen Mill. In the community, he taught classes in adult education and Bible classes on Sunday; served as a trustee of New Garden Boarding School and its successor, Guilford College; and was active in the work of the Pleasant Hill Temperance Society after 1837, and later the Sons of Temperance.

Politically Dixon was never prominent, although he was twice named a candidate for public office over his protest but never elected. It was said of him, "Probably no member of the Quaker Church in North Carolina sacrificed more for religion, education and temperance than did Hugh W. Dixon." His life was happy and successful as he prospered in business and retained until his death a leadership position in many good causes in his community and state.

Dixon and his wife had four children of their own and an adopted son. Their daughters were Mary (Mrs. Z. H. Dixon), Roxie (Mrs. Alpheus White), Nora K. (unmarried), and a son, Joseph M. Dixon, governor and U.S. senator from Montana; their adopted son was A. H. Hinson, who later became a prominent citizen of Kansas City, Mo. His wife preceded him in death (1900), and both were buried at Snow Camp.