Henry Beard Delany was the first black man to become an Episcopal bishop in North Carolina and only the second in the United States; he was also an educator. He was born in St. Mary's, Ga., the son of Thomas Delany, a ship's and house carpenter and Methodist preacher, and Sarah Louisa Delany. During his early childhood the family moved to Fernandina, Fla., where he worked on his father's farm, learned bricklaying and plastering, and attended a school supported by the Freedmen's Bureau and taught by northern missionaries. He studied theology and music, both vocal and instrumental, as well as elementary subjects. Enrolling in 1881 at St. Augustine's School (now College) in Raleigh, he continued his theological studies and was graduated from the academic course in 1885. He remained at his alma mater as a member of the faculty until 1908, teaching religion, music, and in the normal department; he was also chaplain, vice-principal (1889–1908), and supervisor of building projects. Along with his students, he participated in the actual construction of several buildings at the college, notably the chapel (1896), the 1898 library (later part of Taylor Hall), and the former St. Agnes Hospital (1909). These buildings were partially constructed of stone quarried on the campus. The chapel contains a plaque dedicated to him, not only in recognition of his service to the college but also of his career in the Protestant Episcopal church in which he became a communicant while at St. Augustine's. 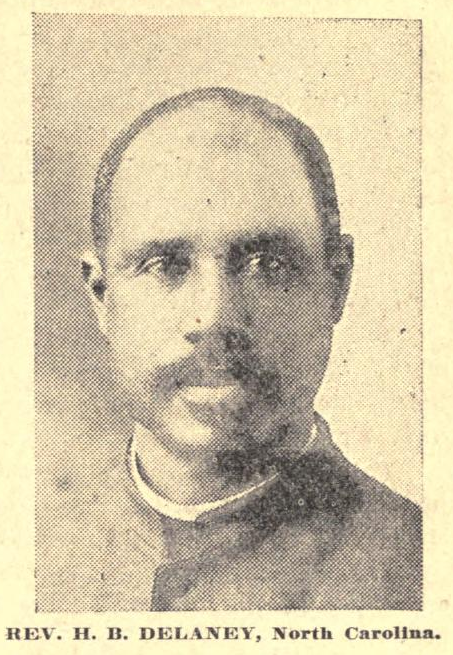 On 7 June 1889 Delany was ordained a deacon in Raleigh's St. Ambrose Episcopal Church, where he continued to assist in services and where he was ordained a priest three years later on 2 May 1892. For the Diocese of North Carolina he was a member of the Commission for Work among Colored People from 1889 to 1904, visiting congregations in several counties and assisting in organizing schools for Negroes. He also made monthly visits to prisoners in the county workhouse. In 1908 he was named archdeacon for Negro work in the diocese, necessitating his resignation from St. Augustine's faculty; but the family continued to live on the campus, where Mrs. Delany was teacher and matron. Shaw University awarded him an honorary D.D. degree in 1911.

On 15 May 1918 Delany was unanimously elected suffragan bishop in charge of Negro work in the Diocese of North Carolina. At that time the only other Negro suffragan bishop in America was the Right Reverend E. Thomas Demby, who served Arkansas and other southwestern states and who was consecrated in the same year as Delany. In his first report to the diocese Delany stated: "On Thursday, the 21st of November, 1918, in St. Augustine's Chapel, on the campus of St. Augustine's School, I was consecrated Suffragan Bishop of the Diocese of North Carolina for Negro Work. At the instance of my election an agreement was made, through our Diocesan that I should also assist the Bishops of East Carolina and South Carolina with their Negro Work." Bishop Joseph B. Cheshire, who presided at his consecration during a conference of church workers among Negroes being held in Raleigh, described Delany's work among North Carolina Negroes as one of the major influences leading to the improvement of Negro life in the South.

Delany continued as bishop until six months before he died at his home on the campus. His funeral was conducted by Bishop E. A. Penick in St. Augustine's Chapel, and he was buried in Mount Hope Cemetery, Raleigh. A memorial published by the diocese noted his steady rise "to a position of eminence in which he had won not only the esteem of his white colleagues throughout the country but also their love," as well as "his congeniality and the uniform gentleness and sweetness of his disposition." Years later the editor of the North Carolina Churchman, the Reverend I. Harding Hughes, recalled him as "a man I so admired—gentle, humble, big hearted, and dedicated."

On 6 Oct. 1886 Delany married Nannie James Logan of Danville, Va., who had enrolled in St. Augustine's in 1877 and remained after graduation as teacher of cooking and domestic science; she was named matron in 1888. A plaque in Delany Residence Hall, built in 1929, indicates that the building was named in recognition of her fifty years' association with the school. She died 1 June 1956 and was buried beside her husband. Their ten children, all born at St. Augustine's, became teachers, doctors, dentists, and attorneys. They include Julia (Mrs. Cecil Bourne), Laura E. (Mrs. Edward Murrell), and Sarah R. Delany, teachers, Henry T. Delany, Jr., and Bessie Delany, dentists, all of Mt. Vernon, N.Y.; Hubert T. Delany, judge of the New York Domestic Relations Court, Lucius L. Delany, attorney, William Manross Delany, and Samuel R. Delany, undertaker, all of New York; and Lemuel T. Delany, a surgeon in Raleigh until his death in 1956.

The Archives of the Episcopal Church. 2008. The Right Reverend Henry Beard Delany. 1858-1928. http://www.episcopalarchives.org/Afro-Anglican_history/exhibit/leadership/delany.php.

Laing, Brien. 2003 "Henry Beard Delany and Emma Beard Delaney: Two African Americans who rose from the obscurity of an enslaved family to achieve distinguished success in their individual lives." Diss. The Union Institute.