Gertrude Mary Cox, statistician and professor, was born in Dayton, Iowa, the daughter of Allen and Emma Cox. She received B.S. and M.S. degrees from Iowa State 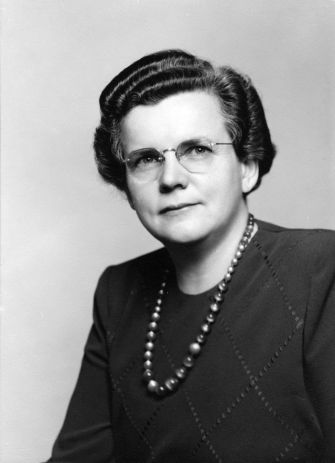 University in 1929 and 1931, respectively, and the degree of D.Sc. (hon.) in 1958. Following postgraduate study at the University of California, Berkeley, where she was a graduate assistant in psychological statistics, she returned to Iowa State as assistant in the newly organized statistical laboratory. In 1939 she was named a research assistant professor. The following year Miss Cox joined the faculty of North Carolina State College in Raleigh as the first woman to become a member of the regular teaching staff. In time she became a professor, head of the department of experimental statistics, and director of the Institute of Statistics, a joint program which she created, of The University of North Carolina and North Carolina State College. She also was instrumental in establishing the Research Triangle Institute and headed its statistical research division. Her work took her to Egypt, South Africa, Thailand, many countries in South America, and elsewhere; in many of these countries she served as statistical adviser and program specialist to the governments. Her work was often sponsored by the Rockefeller Foundation, various agencies of the United States government, and others. She conducted summer institutes at many colleges and universities. Miss Cox was a member of and an officer in numerous professional organizations and was named to the National Academy of Sciences in 1975. In addition to her teaching, research, and consulting she was the author of numerous research bulletins and publications and was co-author of a widely used textbook. In 1959 she received the O. Max Gardner Award for her contributions to the welfare of the human race. In 1960 she retired from the North Carolina State University faculty but continued to reside in Raleigh where her parents had also lived from 1947 until their death. She was buried in Montlawn Memorial Park. The seven-story physics and statistics building on the North Carolina State University campus was named in her honor.