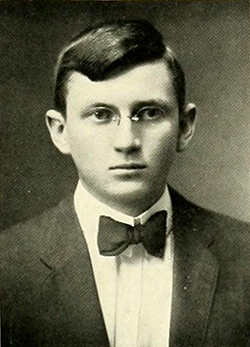 George Lunsford Carrington, pioneer surgeon, was born in Durham County, the son of Ursula Elizabeth Lunsford and Sterling R. Carrington, a prominent businessman in Durham. Carrington received his bachelor's degree and a master's degree in chemistry and zoology from Trinity College, now Duke University. He then entered The University of North Carolina Medical School, where he received his Certificate in Medicine. Then followed more training at Johns Hopkins Medical School in Baltimore, an internship there, and still further training at Yale Medical School and at New Haven, Conn., Hospital. Afterward he spent two years as chief resident surgeon at Bryn Mawr Hospital in Philadelphia.

After thirteen years of training, Carrington returned to Durham in 1924 to establish a private surgical practice and to spend one day weekly as a professor at The University of North Carolina Medical School. He was also involved in research projects at the university. He moved to Burlington in 1928 as a partner of Dr. Ralph E. Brooks at Rainey Hospital, which later became Alamance General Hospital and which was the forerunner of today's Memorial Hospital of Alamance. Numerous honors came to Carrington during his lengthy career. The one he held closest, as he often said, was his selection in 1955 to receive from The University of North Carolina one of the first Distinguished Service Awards for his career and his contribution to medicine, as judged by the university faculty.

Carrington donated the land in Durham County on which Carrington Junior High School now stands. He was also generous in his contributions through the years to educational, medical, and religious interests. He was known in his profession for a long list of published research papers. Talented in writing, he had been editor of The University of North Carolina Daily Tar Heel. His interest in education also dated from his school years; upon graduation, he served as a principal in the Durham school system for a year before entering medical training at the university. At the university, he played varsity basketball for three years and achieved high scholastic rating, earning membership in Phi Beta Kappa. He also won honors during his medical training and practice, becoming a fellow in the American College of Surgeons and a member of the American Board of Surgery.

Carrington was married in 1921 to Maud Easter Black. His second wife was Elizabeth Scott whom he married in 1941.