Cordelia Camp, teacher and writer, was born north of Rutherfordton, the daughter of Merritt Rickman and Letitia Morrow Camp. From her neighborhood one-room school she began 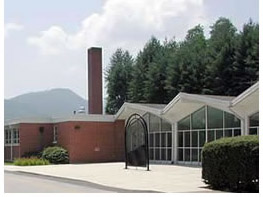 teaching in McDowell County, and after further training at the Asheville Normal and Collegiate Institute she taught in Wake and Forsyth counties. She was graduated from The University of North Carolina with an A.B. degree in 1920 and five years later earned a master's degree from Columbia University. In 1956, Western Carolina Teachers College awarded her an honorary doctorate in education. In 1927 she joined the education faculty of Cullowhee State Normal School, now Western Carolina State University. After her retirement in 1950, a building on the campus was named in her honor, and her portrait hangs there. She also taught briefly at the Plonk School in Asheville.

Cordelia Camp was one of the state founders of Delta Kappa Gamma, teaching fraternity, and was chairman of its publication committee, which produced Pioneer Women Teachers of North Carolina . She was also the author of The Influence of Geography on Early North Carolina; The Settlement of North Carolina (with Eddie Wilson); North Carolina Problems: A Handbook for Teachers; The Family of Merritt Rickman Camp; Governor Vance: A Life for Young People; David Lowry Swain: Governor and University President; A Thought at Midnight: The Story of the Asheville Normal School ; and A History of Piney Knob Baptist Church . For her writing she was awarded the Western North Carolina Historical Association's silver cup in 1964. She served as the association's secretary-treasurer for many years.

She was buried in Rutherford County at Piney Knob Baptist Church.