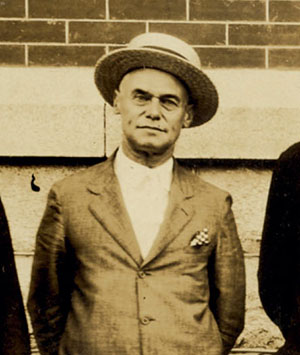 Frank Clyde Brown, professor, departmental chairman, university administrator, and collector of folklore, was born in Harrisonburg, Va. His parents were John Michael and Emma Catherine Liskie Brown. His formal education included an A.B. degree from the University of Nashville in Tennessee in 1893 and M.A. and Ph.D. degrees from the University of Chicago in 1902 and 1908. In 1909 he began a distinguished career as professor of English at Trinity College. An indefatigable worker, in and out of the classroom, he was known to students and colleagues as "Bull" Brown because of both his self-confident charge toward objectives and the roar of disapproval he directed most often not at unprepared students but at those who did not care whether they were prepared or not. A specialist in English literature, he excelled as an interpreter of Shakespeare to generations of students who prized his course as an essential to their liberal arts educations and who often acknowledged his influence long after they departed his classroom.

At the urging of John A. Lomax, president of the American Folklore Society, Brown organized the North Carolina Folklore Society in 1913 and served as its secretary-treasurer, program chairman, and primary collector until his death in 1943. The Frank Clyde Brown Collection of North Carolina Folklore, published by Duke University Press in seven volumes between 1952 and 1964, under the editorial supervision of Newman I. White and Paul F. Baum, represents Brown's lifetime of collecting. These volumes contain approximately thirty-eight thousand items, primarily from North Carolina, illustrating the folk ballads, songs, games, rhymes, beliefs, customs, riddles, proverbs, tales, legends, superstitions, and speech of common folk of the Southeast. Clearly, Brown's definition of folklore was governed more by inclusion than by exclusion, and the volumes bearing his name have been characterized as "the most imposing monument ever erected in this country to the common memory of the people of any single state." Brown's Ford automobile, equipped with a gasoline-powered generator to provide electricity for his recording equipment, was a common sight in the isolated backwoods, where more than once the recording of a familiar voice convinced awed listeners that the fashionably attired professor was not a revenue agent in disguise. Brown took particular pride in recording unwritten ballads and songs, often tracing their origins as far back as the tenth and eleventh centuries. Through his interest in folklore he became a member of the American Folk Lore Society, the Folk Lore Society of England, and the Folk Song Societies of England, Ireland, Wales, and Scotland.

Between 1924 and 1930, Brown was deeply absorbed in the expansion of Trinity College into Duke University, serving as a member of the building committee of the board of trustees and as the first comptroller of the university. The latter position, created in 1926, required his services as the liason for architects, contractors, suppliers, administrators, and faculty in the designing, construction, and equipping of the redesigned East Campus, which became the Woman's College, and the completely new West Campus. He expertly handled a myriad of details and is credited with contributing many original ideas to the building plans, foremost of which was the discovery of the nearby Hillsborough stone and the recommendation that this exceptional material be utilized in the construction of the Gothic West Campus. He also served as university marshal, planning all major formal celebrations and entertaining numerous distinguished visitors to the new university.

Brown's published works included Elkanah Settle: His Life and Work (1910) and Ballad Literature in North Carolina (1915). He had memberships in the Modern Language Association of America; Newcomen Society of England; Phi Beta Kappa; Omicron Delta Kappa, of which he was national president in 1931–32; Sigma Upsilon; and Phi Delta Theta. His religious affiliation was Methodist and his political affiliation Democratic. In 1893 he married Ola Marguerite Hollis, who died in 1928, and in 1932 he married Mrs. Mary Henkel Wadsworth; her son, Joseph A. C. Wadsworth, became Brown's stepson. Brown was buried in Maplewood Cemetery in Durham.