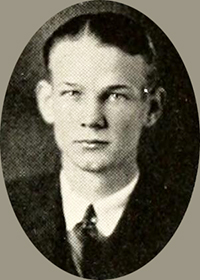 Edwin Pierce Brown, manufacturer and Quaker leader, was born in the community of George in Northampton County, the son of Walter Jay and Lula May Vaughan Brown. He attended Olney (Friends) School in Barnesville, Ohio, and was graduated from Westtown (Friends) Boarding School at Westtown, Pa. He received his A.B. degree from Guilford College in 1926.

He began his business career in 1926, working with his father in Murfreesboro in the manufacture of baskets; as president of Riverside Manufacturing Company, he developed and diversified the company until it served the East Coast. As an industrial leader he served as president of American Package Corporation, as a director of the National Association of Manufacturers, and as an appointee of Governor Luther Hodges to the North Carolina Banking Commission. He served as a director of Virginia Electric and Power Company, the Farmer's Bank of Woodland, and Wachovia Bank and Trust Co. and was chairman of the board of trustees of Roanoke-Chowan Hospital in Ahoskie. He was a trustee of Guilford College from 1941 to 1972, and as its chairman from 1969 to 1972, following his retirement, he devoted almost all of his time to the development program of the college.

Brown's deep interest in civic and religious affairs was expressed through his support of many organizations and institutions, including Chowan (Baptist) College in his home town of Murfreesboro and the Murfreesboro Historical Association, of which he was president. As an elder in Rich Square Monthly Meeting of Friends and as clerk of the representative body of the North Carolina yearly Meeting of Friends (Conservative) in Woodland, he was recognized as a national and international leader of his branch of Quakerism, representing it at the Third and Fourth World Conferences of Friends, at Oxford, England, in 1952 and at Guilford College in 1967. He was especially noted for his interest in and assistance to deserving students, among whom were many fine athletes. Because of this special interest, he was elected to the Guilford College Athletic Hall of Fame and was given the Distinguished Alumni Award. As an industrialist, he was noted in Eastern North Carolina for his progressive relations with his employees, both black and white.

In 1933 he married Dorothy Heath, to whom were born four children: Edwin Pierce, Jr., Hannah Heath, Dorothy May (Mrs. Robert McBrayer Shoffner), and Andrew Vaughan. Brown died in Norfolk, Va., and was buried in the Murfreesboro Cemetery. Portraits of him are located in the Northeastern Oil Company office and the family home in Murfreesboro and in Roanoke-Chowan Hospital in Ahoskie.