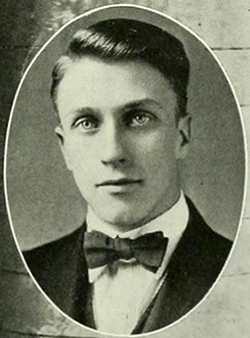 Cecil Kenneth Brown, economist and educator, was born in Salisbury, the son of Pleasant Marion and Carolina Amery Shelton Brown. After receiving his education in Cleveland County schools, he entered Davidson College in the fall of 1917. He was an active member of the Davidson College community throughout his life. As an undergraduate he was an honor roll student, a member of the intercollegiate debating team for two years, president and critic of the Philanthropic Literary Society, a member of the YMCA Board of Control, president of Le Cercle Français, and valedictorian of the class of 1921. He was also a member of Phi Beta Kappa, Phi Delta Theta, Omicron Delta Kappa, and Sigma Upsilon.

Brown began his teaching career at Davidson in 1923. He was an assistant professor of mathematics for two years. When he returned to The University of North Carolina in 1925, he worked as a research assistant at the Institute for Research in Social Science. He was promoted to research associate in 1929. He also served as visiting instructor in economics at the university in the 1928, 1929, 1937, and 1952 summer sessions.

Brown rejoined the Davidson faculty as assistant professor of economics in 1927. In 1929 he was promoted to full professorship. He began to urge the faculty to approve honors in education during the early 1930s, believing that an honors program was necessary at Davidson in order for the school to fulfill its obligation as a liberal arts college offering education to meet the needs of its students. He continued to push this program until it was set up in 1940. Brown became dean of the faculty in 1941 and held that position until 1953.

During his career, Brown attended many educational conferences and conventions, including the meetings of the Southern University Conference, the Presbyterian Educational Association of the South, and the Association of American Colleges. He was vice-president of the North Carolina College Conference during 1948–49 and secretary-treasurer of the Council of Church Related Colleges of North Carolina from 1945 until 1950. He was secretary-treasurer of the Conference of Academic Deans of the United States from 1947 until 1950, when he was elected chairman. He was also a member of the American Economic Association and the Historical Society of North Carolina.

Brown was quite active in the Presbyterian church and, as a member of Davidson Presbyterian Church, taught the Men's Bible Class there. He was an elder in his church and was named moderator of the Concord Presbytery in 1948.

After his death, Brown's friends and former students established the Dr. C. K. Brown Scholarship Fund. He was buried in the Davidson College Cemetery.