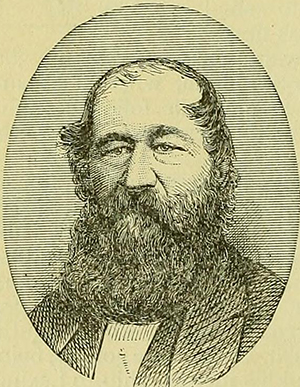 Iveson Lewis Brookes, Baptist clergyman, planter, and Southern sectionalist, was the eldest of five sons of Jonathan and Annie Lewis Brookes and was born in Rockingham County. His father was a veteran of the Revolution. His parents had only recently moved to North Carolina from Spotsylvania County, Va., where many of his relatives continued to live; soon after his birth his parents moved permanently to Caswell County. Educated in a local academy during his early years, in 1812 Brookes enlisted in the American army. After seeing only limited action during the War of 1812, he entered The University of North Carolina. He was graduated in 1819 after developing what proved to be a lifelong acquaintance with both James K. Polk and Thomas Hart Benton. In his commencement address, entitled "Is the State of the World Better in the Present Age Than at Any Former Period?" Brookes expressed an optimism and an enmity to slavery that were totally antithetical to his later positions. Undecided about his future, he spent a year as a teacher in Greensboro.

During his senior year at the university, Brookes became acquainted with Basil Manly, a Baptist clergyman who would be his closest friend. After months of correspondence with Manly, Brookes became convinced that his greatest opportunities for the future lay in the Baptist ministry and in a lucrative marriage. Licensed to preach on 4 Dec. 1819 in North Carolina and ordained a month later at Georgetown, S.C., Brookes spent a year traveling throughout South Carolina as a domestic missionary for the Itinerant Board of the South Carolina Baptist Convention.

A year later he settled in Eatonton, Ga., as the rector of the town's academy and as the local Baptist clergyman. He also found there the first of his three wives, Lucina Sarah Walker, and the wealth he desired. From the Walker family, Brookes got control of vast plantations and slaves in Putnam, Jasper, and Jones counties, Ga. From a second wife, Prudence E. Johnson, whom he married in 1828, he obtained more property in Georgia. Upon the death of his second wife in 1830, much of his property was placed in guardianship for his one son. Not content with the already vast estates he had built up in Georgia, Brookes married Mrs. Sarah J. Myers in 1831 and obtained thereby two plantations in Aiken and Edgefield counties, S.C. Soon after this marriage he settled on an estate at Woodville, near Hamburg, in Aiken County, S.C., where he spent most of the remainder of his life. From Woodville he operated a vast network of plantations and gangs of slaves until his death only ten days before Lee's surrender at Appomattox Courthouse. He spent about four years in the mid-1840s as head of an academy for women in Penfield, Ga., and he kept up his associations with Baptist clergymen and retained the pastorate of a small church most of his life, but he remained primarily a large-scale planter.

Although he had opposed slavery as a student at The University of North Carolina, Brookes became a staunch defender of slavery and a rabid southern sectionalist. During the Nullification controversy, he was made a minuteman by Governor James Hamilton of South Carolina. In 1861, at the age of sixty-eight, he offered himself for service in the Confederate Army. From the first appearance of abolitionism he feared for the future of southern society. From 1835 he wrote dozens of defenses of slavery, most of them in the form of letters to northern antislavery periodicals. His most famous defenses were two pamphlets written during the crisis of 1850: A Defence of the South against the Reproaches and Incroachments of the North (1850) and A Defence of Southern Slavery against the Attacks of Henry Clay and Alexander Campbell (1851), the latter written at the behest of Governor James Henry Hammond of South Carolina. The productions of an enraged slaveholder revealing little of the optimistic and balanced thinking of his youthful years, those two documents stood as the most characteristic statements of a die-hard southern sectionalist who had learned to love the life of a slaveholding planter.

Brookes was buried in Augusta, Ga.

"The Value of the Extended Family." The History Engine: Tools for Collaborative Education and Research. The University of Richmond. 2008-2009. http://historyengine.richmond.edu/episodes/view/2822 (accessed December 6, 2013)