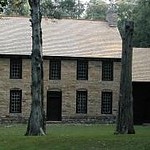 Michael Braun (or Brown), frontiersman, master builder, and entrepreneur, is said to have been born in Hesse-Darmstadt, Germany. He stepped upon American soil at the port of Philadelphia 26 Sept. 1737, alighting from the ship St. Andrew Gally, John Stedman, master, from Rotterdam but most recently from Cowes. At that time, Braun was a lad of about sixteen; along with 140 other immigrants from the Palatinate, he took the oath of allegiance to his newly adopted country that very day. For fifteen or twenty years he stayed in Pennsylvania, having learned the trades of wheelwright and printer, and then he headed with his family and a good bit of money to the rolling hills of North Carolina. There he moved to the focus of North Carolina's pioneer history, becoming one of America's legendary frontiersmen.

He bought his first land in Rowan County from John Dunn in 1758; he and Dunn were among the first settlers of this area and were friends and neighbors. Braun bought many lots in the town of Salisbury, built several houses there, and lived there before settling a few miles south of the town by the Granite Ridge, near what is now Granite Quarry. In 1766 he laid the cornerstone to the Old Stone House, the oldest house still standing in Western North Carolina. The house is built of native stone with portholes in the gables. The lower floor contains five rooms, well finished with plaster, one of which is a kitchen with a chimney eight feet long and four feet deep. The stone over the front door is inscribed MICHAEL BRAUN MRICHREDA BRAUN IO PE ME BE MI CH DA M '1766. Tradition says the main part of the British army passed by the Stone House on the evening of 2 Feb. 1781 on the way to Alamance and that the deep gash in the old walnut facing of the door was made by a British sabre.

Braun was a rich and influential man for his time and place and a conscientious citizen. He was called esquire. In town he had a number of varied business interests: he kept an ordinary and had a tanyard, as well as renting his other houses. The year after he came to Rowan he was appointed magistrate in Captain Peter Faust's company. In 1761 the court minutes show that he was appointed constable, a position of some importance at that time. In 1765 he was overseer on the roads, and many times he served as a juror. He was appointed justice 6 Aug. 1777. The census of 1790 shows that he enslaved 15 people.

Braun and Frederick Fisher gave more than one hundred acres of land for the Dutch Pine Meeting House (now Union Evangelical Lutheran Church), and the original deed was made to them. It is safe to assume they were members of this early church.

Braun appears to have had at least three wives. From Pennsylvania he brought with him his wife Margareta, by whom he had six sons—David, Peter, Moses, James, and Jeremiah—and three daughters, who all died young. Margareta Braun died 20 July 1771, at the age of thirty-seven years, two months. She was buried in the Michael Braun Graveyard, once surrounded by a stone wall. In 1779 a wife named Rosanna signed a deed with Braun; and his wife at the time of his death was Eleanor Wakefield Reeves of Maryland, whose daughter Clementine, born after his death, later married Charles Verble.

Braun wrote his will 12 Oct. 1807 and died before 2 Feb. 1808, when it was proved in open court in Rowan County and ordered recorded in Rowan County Will Book D:17. In this will he left Eleanor the Stone House and named Montford Stokes guardian for his unborn child. His grave, presumably in the family graveyard, is unmarked, as are those of his other wives and his daughters.