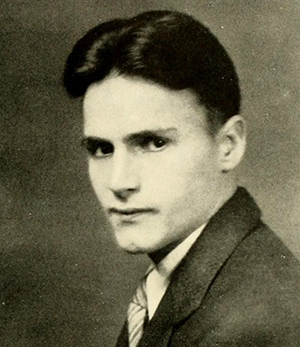 Bernard Henry Boyd, educator and clergyman, was born the second of the four sons of Frank Thomas and Eunice Beaty Boyd in Mt. Pleasant, S.C. Frank Boyd was a successful general contractor, and much credit must be given to him and to his wife for the encouragement and education their sons received. Mrs. Boyd taught the boys from their earliest years to love poetry and good literature, and this love not only remained with Bernard but was very much a part of his life: in the classroom or pulpit he could with seeming ease quote at length from works of the major English and American poets and from the Bible. Robert F., Bernard's oldest brother, was to become a Presbyterian minister; Francis Thomas, Jr., was a businessman who died only a few months before Bernard; the youngest, William Beaty, became a university president.

Bernard Boyd was educated in the public schools of Mt. Pleasant and at Boys' High School in Charleston across the bay. In the fall of 1928 he entered Presbyterian College, receiving his B.A. in 1932; following graduation he entered Princeton University for graduate study in English. He also became a student in Princeton Theological Seminary; he received his M.A. degree from the university in 1934 and his bachelor of theology degree from the seminary in 1935. He continued his graduate study at Union Theological Seminary, Richmond, Va., and after World War II completed his course work and was awarded the doctor of theology degree in 1947.

Upon graduation from Princeton, Boyd returned to his alma mater, Presbyterian College, where he was professor of Bible until 1947. His teaching was interrupted by the coming of the war. Though essentially a man of peace, he had been commissioned a reserve officer in the U.S. Army upon graduation from college. By 1943, with his students being called into service, he no longer felt inclined to use his ministerial exemption and volunteered for naval duty as a chaplain, with the request that he be assigned to the Marine Corps. He was ordained to the Presbyterian ministry, which had not previously been necessary as he had never before been charged with the pastorate of a congregation; within a few weeks after his military training was completed, he was shipped to the Pacific area. There he saw heavy fighting and was severely wounded in the battle for Okinawa. The war made a deep impression upon him, and in later years he rarely mentioned his experiences under fire.

As a young faculty member at Presbyterian College, Boyd quickly established himself as a superior teacher and lecturer. Upon separation from military service he spent two terms at Union Theological Seminary and then returned to teach at Presbyterian College for one year. In 1947 he became professor of Bible at Davidson College, where he taught until 1950, when he received the offer of an endowed chair from The University of North Carolina. It was with reservation and considerable reluctance that Boyd accepted the James A. Gray Professorship of Biblical Literature; he was happy at Davidson and felt that in a smaller, church-related institution he could do his best work. But the decision to move to Chapel Hill was made, and he filled this new position with distinction for the remaining twenty-five years of his life.

Boyd undoubtedly felt a measure of disappointment during his first year at the university; his classes were small, and he questioned his decision to leave Davidson. But his capabilities as a teacher, coupled with his almost magnetic personality, soon brought increasing numbers of students, until well above two hundred were regularly enrolled in each of his lecture courses. Although students did not find Boyd's courses easy, his ability as a teacher was attested on at least three occasions: he twice received the university's Tanner Award for "excellence in inspirational teaching of undergraduate students," and he was presented the Nicholas Salgo Distinguished Teacher Award for "excellence as evidenced by . . . classroom effectiveness and ability to motivate and inspire students."

People across the State of North Carolina came to know Boyd through educational television programs that were scheduled for several years: "Bernard Boyd and the Bible," "The Origin and Significance of the Bible," and "Introduction to the New Testament Literature" each gained a wide audience. On countless Sundays he occupied pulpits, usually but not always Presbyterian. He was also in demand as a speaker for large church conferences. He was a member of the Society of Biblical Literature, American Schools of Oriental Research, American Academy of Religion, and Archaeological Institute of America; he prepared papers presented at some of their sessions.

Following a trip to Israel in 1956, Boyd became interested in archaeology; from 1963 on he visited the Holy Land each summer and actively participated in the excavations. Though self-taught as an archaeologist, he was educational director for the Institute of Mediterranean Studies from 1965 through 1967 and was its archaeological director after 1968. From 1968 to 1971 he was institute lecturer for the Archaeological Institute of America, and from 1966 until his death he was codirector or director of expeditions to Israel.

In 1944, only a short time before he was shipped overseas, Boyd married Thelma Hicklin of Richburg, S.C. They had two children, Donald Beaty and Karen Elizabeth. Boyd died suddenly of a heart attack shortly after he had finished a sermon as guest minister at Tabernacle Associate Reformed Presbyterian Church in Charlotte. Funeral services were held in University Presbyterian Church in Chapel Hill, and interment was in the new Chapel Hill Cemetery.