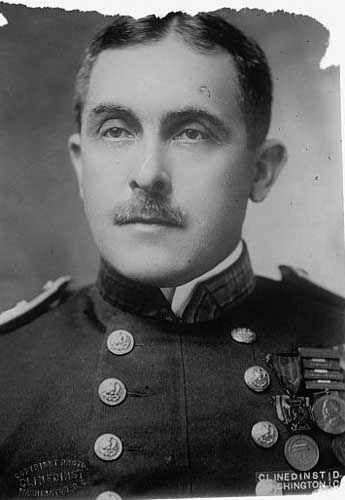 Victor Blue, naval officer, was born in Richmond County of Scottish ancestry. His parents were John Gilchrist and Annie M. Evans Blue. Blue's father was a colonel in the Confederate Army; his grandfather, John Blue, was a colonel in the War of 1812; and two of his great-grandfathers served as captains: John Blue in the Continental Army and John Gilchrist in the British navy. Blue's father was a member of the North Carolina delegation considering the issue of secession from the Union and voted to secede, later raising a company and fighting with Robert E. Lee in the Army of Northern Virginia until the surrender at Appomattox.

Blue's family moved to Marion, S.C., when he was still a baby. His mother's family had long been prominent in South Carolina affairs, one member having served as governor of the state. Blue grew up in the area around Marion and was appointed to the U.S. Naval Academy on 6 Sept. 1883. He was graduated in 1887 and began a naval career spanning thirty-two years.

With the outbreak of the Spanish-American War in 1898, Blue was assigned to the Suwanee of the Atlantic Fleet commanded by Admiral William Sampson. Blue twice led expeditions behind the enemy lines near Santiago, Cuba, first to communicate with the insurgent general-in-chief Maximo Gomez on mainland Cuba and next to obtain information concerning the number and position of the ships in the Spanish Fleet commanded by Admiral Pascual Cervera y Topate. During this second mission, Blue placed the first American flag on Cuban soil and then traveled seventy miles on muleback to obtain his information, which 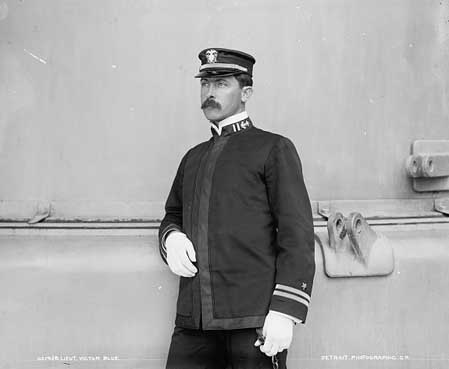 led to the American victory in the Battle of Santiago de Cuba on 3 July 1898. For his actions, Blue was awarded the Special Meritorious Medal and advanced five numbers in rank by the president.

Blue continued his naval service. He was commander of the Yorktown, Pacific Station, 1910, and chief of staff, Pacific Fleet, 1910–11; on 25 May 1911 he was made a member of the General Board of the Navy Department. In 1913, while still only a commander, Blue was assigned as chief of the Bureau of Navigation of the Navy Department. He held this position with the rank of rear admiral from 26 Mar. 1913 until 10 Aug. 1916. During World War I he commanded the battleship Texas, operating with the British Grand Fleet under Admiral David Beatty in the North Sea. He took part in receiving the surrender of the German Fleet on 21 Nov. 1918 and was reappointed chief of the Bureau of Navigation, 16 Dec. 1918. For his service in the war he received the U.S. Navy's Distinguished Service Medal with the citation, "For exceptionally meritorious service in a duty of great responsibility . . . ," and was decorated commander of the Order of Leopold by the king of Belgium.

Victor Blue. Created between 1908 and 1919. Image courtesy of Library of Congressin the National Photo Company Collection. Available from http://www.loc.gov/pictures/resource/npcc.19737/ (accessed May 6, 2013).

Victor Blue. Created between between 1890 and 1901. Image courtesy of Library of Congress in the Detroit Publishing Company Photograph Collection. Available from http://www.loc.gov/pictures/resource/det.4a15097/ (accessed May 6, 2013).