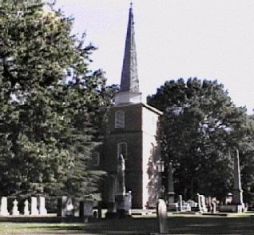 John Blacknall, Anglican missionary, came to North Carolina from London in the retinue of Sir Richard Everard, who arrived in Edenton in July 1725 as the governor newly appointed by the Lords Proprietors. The Parish Vestry Book for the period shows that Blacknall became "Received Minister Resident" at St. Paul's Church, Edenton, on 18 Aug. 1725, a month after Sir Richard was inaugurated as governor.

Blacknall brought with him from England his son, Charles Blacknall, who was about a year old. If his wife or other members of his family came, the scanty records make no mention of them. It is reasonable to suppose that his wife came also; but who she was, when and where they were married, who were her parents and who were his, where he was born, and the sources of his education—all these are questions for which answers remain to be found. Intensive research in appropriate American and British sources has produced little note of Blacknall before his coming to North Carolina. In a 25 Jan. 1726 letter from North Carolina written to the Bishop of London, Governor Everard wrote: "I'm greatly obliged to your Lordship for obliging me with my request and admitting the Rev. Mr. Blacknall to come with me to Carolina. He is a Gentm that's a very good Preacher, a Gentm perfectly sober, belov'd by all but Mr. Burrington's Party. He had made about 160 Christians since he has been here & I don't in the least doubt, but he'll double that number before he has been here a twelve month. . . ."

Governor Everard no sooner arrived in the colony than he began a bitter feud with former governor George Burrington, who was himself a bellicose character, fully as resourceful in the compounding of spite and meanness as Sir Richard. Each recruited his faction or, to use Everard's term, his "Party." Everard sought to involve and embroil Blacknall as his own partisan, no doubt surmising that the gentle rector's appreciation of past favors could be depended upon to draw him into Everard's squabbles with the Burrington faction. Indeed, the stratagem at first showed promise of success; for Blacknall, being inexperienced in the rough and tumble of politics, seemed unable to elude the tangled web of intrigue and counterintrigue, though he loathed it all. As Blacknall found his pressures from Everard increasingly distasteful and insufferable, extricating himself from the governor's toils became the supreme preoccupation of his mind.

The solution to his problem occurred to him while he was riding his circuit of chapels and congregations in the precincts of old Albemarle County to the eastward of Chowan. In the easternmost precinct, called Currituck, a white parishioner named Thomas Spencer presented himself with his bride-elect, a mulatto girl named Martha Paul. Blacknall well knew that it was unlawful in North Carolina for anyone to perform a marriage uniting a white person and a person known to be of Negro blood. He also knew that, with a large overbalance of white men in the Province of Carolina, "Winchester Weddings," sanctioned without racial scruple by the laws of biology however much forbidden by manmade law, were occurring with considerable frequency and were almost respectable in the eyes of many people. To officiate as minister at the wedding of the Spencers would, if he were indicted, cost him a fine of fifty pounds, half of which would be paid to the informer for tattling. Blacknall conceived a plan to escape from the web of political intrigue by causing Everard and his party to desire him to leave the colony itself.

Spencer and Paul journeyed to Edenton, where Blacknall performed the marriage ceremony. Then, going straight to the chief justice of the province, Christopher Gale, Blacknall informed upon himself and registered his claim for that half of the fine which by law went to an informer. Blacknall was duly indicted but actually was never tried and fined. He was quietly advised to make an extended visit to Virginia and then decide to stay there. A mere misdemeanant would not be extraditable. He took the advice, waiting only long enough to collect his arrears in pay from the Vestry of St. Paul's before departing. The Vestry Book shows no note of his being dismissed nor of his having resigned. He simply went on the visit and was silently dropped. The account record shows Blacknall was paid a salary of fifty-four pounds, ten shillings, in 1726, a full year's pay. Since he departed before he had completed the year, this may be taken as evidence of goodwill or of good riddance. As for his indictment, the suit lingered in the general court of oyer and terminer and gaol delivery, being continued from term to term for some six months while the marshal repeatedly reported that the defendant was not to be found in the province. The attorney general tinkered with the idea of trying the newlyweds for the offense; but an indictment of them did not square with the statute. Blacknall never returned to the jurisdiction of North Carolina and so was never tried, convicted, or fined.

By 1727 he had become permanently settled in Kingston Parish, Gloucester County, a location now in Mathews County, Va., across the river from the historic site of Yorktown. Here he spent the rest of his life as a beloved and successful minister, and here his son, Charles, grew to manhood. Letters in the Fulham Palace Papers, now in Lambeth Palace Library, London, show that Charles Blacknall was prepared to follow in his father's footsteps as rector; but the arrival of twins much too early after his marriage raised questions of "misbehavior." However, after a few months delay, he became rector-designate for Kingston Parish. Later he was made rector and served there until his own death in 1769.