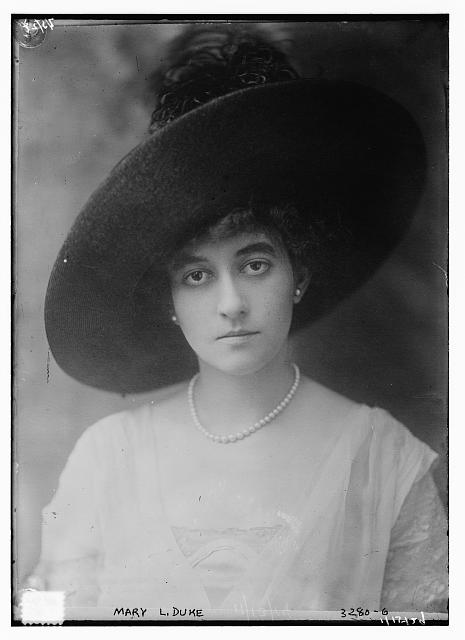 Mary Duke Biddle, philanthropist, was born in Durham to Benjamin Newton and Sarah Pearson Angier Duke. Educated first in the public schools of Durham, she was graduated from Trinity College in 1907. She traveled extensively in Europe, was presented at the Court of St. James, and was frequently in New York even before her father acquired a Fifth Avenue home there soon after the turn of the century. A lover of opera, she became a serious student of vocal music and patron of the arts. In June 1915, shortly after her brother, Angier Buchanan Duke, married Cordelia Biddle of Philadelphia, Mary Duke married Anthony J. Drexel Biddle, Jr., Cordelia's brother. Anthony and Mary Biddle had two children, Mary Duke II (later Mrs. James H. Semans) and Nicholas Benjamin Duke; they were divorced in 1931. Until her death, Mrs. Biddle maintained homes in New York City, Durham, and Irvington-on-the-Hudson, N.Y.

Continuing a philanthropic tradition begun by her paternal grandfather, Washington Duke, and long sustained primarily by her father, she began making substantial benefactions to Trinity College in the 1920s. In 1931 she purchased the Washington Duke Homestead and gave it to Duke University, which transferred title to the State of North Carolina after the homestead was designated a National Historic Landmark in 1968. In 1938, Mrs. Biddle gave the Sarah P. Duke Gardens of Duke University as a memorial to her mother, and shortly after World War II she met an especially critical need of Duke University with a gift of $1.5 million for expansion of the main library. Numerous other gifts went to North Carolina College in Durham, Lincoln Hospital in Durham, and various institutions elsewhere in North Carolina and in New York.

In 1956 she established the Mary Duke Biddle Foundation in order to continue to support, after her death, those institutions and activities in North Carolina and New York that had long been of interest to her; by her will she left her residuary estate to the foundation. She directed that at least half the income of the foundation should go to Duke University. Between 1956 and 1972, the foundation disbursed nearly $5.6 million for projects at Duke University, elsewhere in North Carolina, and in New York. Because of her love for art and music, the foundation has been especially, although not exclusively, interested in the arts.

A lifelong member of Duke Memorial Methodist Church in Durham, she was buried in the Duke family mausoleum in Maplewood Cemetery in Durham. There are portraits in the Rare Book Room of the W. R. Perkins Library and in the Mary Duke Biddle Music Building at Duke University.