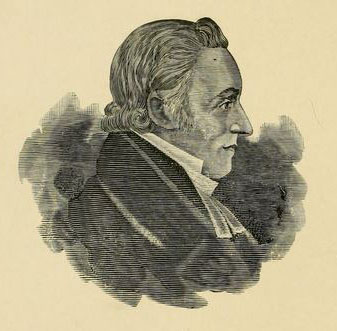 John Bethune, Presbyterian minister, was born on the Isle of Skye, Scotland, and raised in the Parish of Sleat under the ministry of the Reverend John MacPherson. MacPherson impressed upon the young man the importance of learning and encouraged him to enter the ministry and continue his education at King's College, Aberdeen. Bethune returned home from his studies to find the people of Skye planning almost en masse to leave their homes and settle in North Carolina. He soon caught the emigration fever and came over as early as 1773 as a licentiate of the (Presbyterian) Church of Scotland. Here, on McLendon's Creek in what is now Moore County, he settled with his mother, Christian, and his maternal grandparents, Donald and Katherine Campbell of Scalpay. In the few years before the outbreak of the American Revolution, Bethune ministered to the Highland Scots around him in their native Gaelic tongue. He organized the present-day Mt. Carmel Presbyterian Church near Ellerbe.

Early in 1776, North Carolina Highlanders loyal to the king set out for the coast to join Governor Josiah Martin, and Bethune went along as their chaplain. They were intercepted at Moore's Creek by Americans who got there first, set up a defensive position on the opposite side of the stream, removed the plank from the bridge, and greased the two log beams that remained. Bethune and other officers were taken prisoner and sent to Philadelphia for confinement. Their imprisonment was not of long duration. They were given their freedom sometime in November of that year on their promise not to take any further part in the war. Upon his release, Bethune made his way to Halifax, Nova Scotia, where he was made chaplain to the First Battalion of Royal Highland Emigrants. On 23 Nov. 1778, because he was "in some distress for want of money," he was appointed chaplain to the entire regiment by Captain Alexander MacDonald. While the regiment was stationed in New York State, he met Veronica Wadden, a native of Switzerland, whom he married 30 Sept. 1782.

After the peace, the Bethunes took up residence in Montreal, along with other United Empire Loyalists. Many of these looked upon him as their leader, and he drew them together to form the first Presbyterian congregation in the city, the St. Gabriel Street Church. Here he ministered from 12 Mar. 1786 until 6 May 1787, when he and his family moved to Upper Canada (now Ontario).

Basic to their decision to move was the lure of land, which was being granted to United Empire Loyalists in appreciation for their services during the war. As a chaplain, equivalent in rank to a captain, Bethune was entitled to three thousand acres. He settled at Williamstown, Glengarry County, and began his ministry there, thus becoming the pioneer Presbyterian minister in what is now the Province of Ontario. He soon organized churches at Williamstown, Martintown, Summerstown, Cornwall, and Lancaster and ministered to them until his death. He was buried beside his wife in the churchyard at Williamstown.

John Bethune was the first minister of any denomination to serve in what are now Moore, Montgomery, Richmond, and Anson counties, N.C., and the first Presbyterian minister to serve in the city of Montreal, Quebec, and the Province of Ontario.