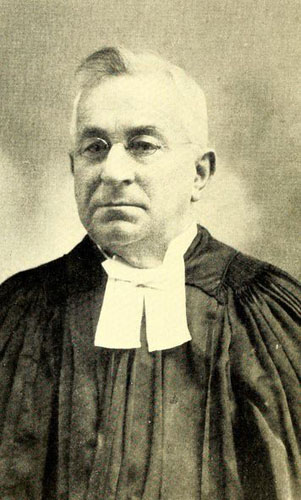 Gotthardt Dellman Bernheim, Lutheran pastor, educator, and author, was born in Iserlohn, Westphalia, East Prussia. His father was John Herman Bernheim, a Jewish convert to Christianity who, following his baptism, entered the Lutheran ministry and labored as a missionary to Jews under the direction of the London Missionary Society. His mother was Lizette Dellman. In 1832 the Bernheims emigrated to the United States and settled in western Pennsylvania, where Pastor Bernheim became a member of the Lutheran Ministerium. Here Gotthardt, the elder of two sons, received his early education and was confirmed into the Lutheran faith in Armstrong County. In 1846 he rode horseback to Lexington, S.C., to attend the South Carolina Synod's Classical Institute and Seminary, where he was graduated in 1849. Licensed in the same year and ordained in 1853, he was pastor of St. Andrew's Church, Charleston, from 1853 to 1858. Later his brother, Charles Herman, was educated for the Lutheran ministry and became a prominent pastor in southern churches.

In 1858, Bernheim affiliated with the North Carolina Synod and until 1860 served the historic St. John's Church in Cabarrus County and New Bethel Church in Stanley County. At the same time his interest in the educational mission of the church led him to accept a position as financial agent for the emerging North Carolina College, a Lutheran institution for men in Mt. Pleasant. Soon he was elected to its first board of trustees. In 1861 he removed to Charlotte to become pastor of St. Mark's Church which he had previously organized, and of St. Michael's, Troutman. He served both churches until 1865. Following his Charlotte pastorate, he worked actively in the North to secure funds for the purchase by the North Carolina Synod of the North Carolina Female Seminary, later Mont Amoena Seminary, at Mt. Pleasant. Successful in this venture, he was elected president of the seminary and occupied that position from 1868 to 1870. During these years he also organized and was first pastor of Ebenezer Church, Rowan County. Afterward, he was called to the pastorate of St. Paul's Church, Wilmington, where he remained from 1870 to 1882. While at St. Paul's, Bernheim established a parochial school and the St. Paul's Female Seminary. In 1877 he was the recipient of an honorary D.D. degree. Following his ministry in Wilmington, he was briefly president of North Carolina College. Then he left the state to serve Grace Church, Phillipsburg, N.J., from 1883 to 1892. He returned to North Carolina in the latter year to accept a call to St. Matthew's Church, Wilmington, where he remained until 1901. In that year he retired at Charlotte and was supply pastor of St. Luke-Morning Star Parish in Monroe from 1905 until 1907. At that time he again became interested in educational pursuits and joined the faculty of Elizabeth College, a Lutheran institution for women located in Charlotte, where he was dean of the faculty and professor of the English Bible and sacred literature.

Bernheim was married twice: on 25 Apr. 1854 to Elizabeth Crowe Clayton of Charleston, S.C. (eight children); and after her death to Amanda Ella Lease of Nokomis, Ill. on 22 Apr. 1897 (five children).

Paul McCullogh, ed., A History of the Lutheran Church in South Carolina (1971).